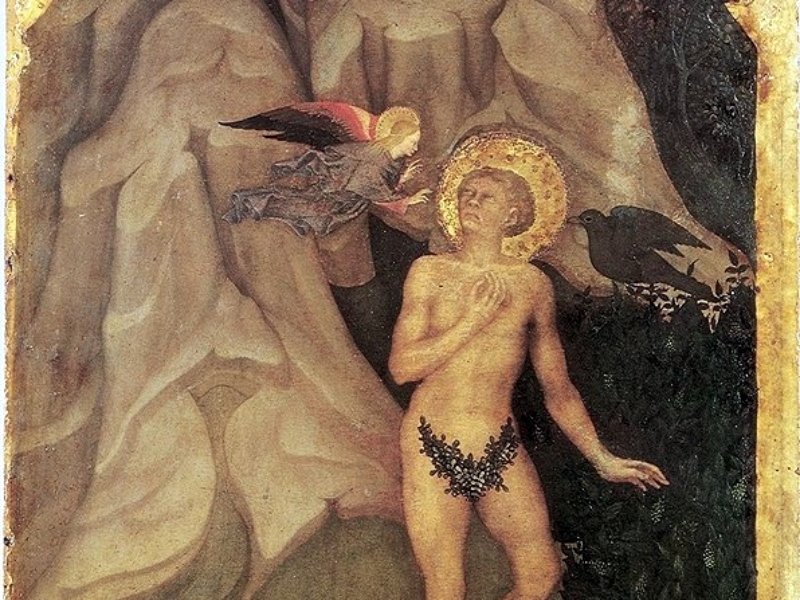 From the late 7th century Dialogues (Latin) misattributed (Francis Clark, The “Gregorian” dialogues and the origins of Benedictine monasticism) to Gregory the Great a century earlier:

There was a man of venerable life, blessed by grace, and blessed in name, for he was called “Benedictus” or Benedict: who, from his younger years, carried always the mind of an old man; for his age was inferior to his virtue: all vain pleasure he contemned, and though he were in the world, and might freely have enjoyed such commodities as it yieldeth, yet did he nothing esteem it, nor the vanities thereof. He was born in the province of Nursia, of honourable parentage, and brought up at Rome in the study of humanity. But for as much as he saw many by reason of such learning to fall to dissolute and lewd life, he drew back his foot, which he had as it were now set forth into the world, lest, entering too far in acquaintance therewith, he likewise might have fallen into that dangerous and godless gulf: wherefore, giving over his book, and forsaking his father’s house and wealth, with a resolute mind only to serve God, he sought for some place, where he might attain to the desire of his holy purpose: and in this sort he departed, instructed with learned ignorance, and furnished with unlearned wisdom…

Benedict becomes a hermit in an Apennine cave above Subiaco, but the devil has some unfinished business:

Upon a certain day being alone, the tempter was at hand: for a little black bird, commonly called a merle or an ousel, began to fly about his face, and that so near as the holy man, if he would, might have taken it with his hand: but after he had blessed himself with the sign of the cross, the bird flew away: and forthwith the holy man was assaulted with such a terrible temptation of the flesh, as he never felt the like in all his life.

A certain woman there was which some time he had seen, the memory of which the wicked spirit put into his mind, and by the representation of her did so mightily inflame with concupiscence the soul of God’s servant, which did so increase that, almost overcome with pleasure, he was of mind to have forsaken the wilderness. But, suddenly assisted with God’s grace, he came to himself; and seeing many thick briers and nettle bushes to grow hard by, off he cast his apparel, and threw himself into the midst of them, and there wallowed so long that, when he rose up, all his flesh was pitifully torn: and so by the wounds of his body, he cured the wounds of his soul, in that he turned pleasure into pain, and by the outward burning of extreme smart, quenched that fire which, being nourished before with the fuel of carnal cogitations, did inwardly burn in his soul: and by this means he overcame the sin, because he made a change of the fire.

Pierre Courcelle points out (“Saint Benoit, le merle et le buisson d’épines”) that as a carrier of moral death this bird is remarkably similar to the one which brings tidings of physical death to Turnus and Juturna in the Aeneid, as well as to subsequent examples like the one that plagues the magicians and heathen poets in Herrad of Landsberg’s 12th century Hortus deliciarum. Here’s Dryden‘s Virgil:

Soon as she spied the Teucrians in array
and Turnus’ lines, she shrivelled to the shape
of that small bird which on lone tombs and towers
sits perching through the midnight, and prolongs
in shadow and deep gloom her troubling cry.
In such disguise the Fury, screaming shrill,
flitted in Turnus’ face, and with her wings
smote on his hollow shield. A strange affright
palsied his every limb; each several hair
lifted with horror, and his gasping voice
died on his lips

Since the bird is clearly a generic bringer of bad news, I was curious that the author of the Dialogues makes no explicit connection between it and the female phantom who causes such delicious reminiscences, and so I set out to see if anyone else had had the same idea.

The Latin calls the bird merula, which, as well as a fish, is also a prominent cognomen – a kind of hereditary nickname – in pre-Christian Roman history, still remembered for the tragic fall of Lucius Cornelius Merula.

So, I wondered, did a “Benedict” flee Rome to escape an entanglement of some nature with a Merula, only to be haunted by a bird of the same name?

Yep, says Camillo Massimo in Memorie storiche della Chiesa di S. Benedetto in Piscinula nel Rione Trastevere (1864), in which he discusses Benedict’s opulent domestic circumstances in Rome and anticipates my hypothesis, without explaining who told him:

The ravings of a modern romantic? Extraordinary traces of a pre-Benedictine romance (the Benedict-Merula connection seems far-fetched)?

All I was actually looking for was an explanation of why in a Spanish 16th century reference to this tale the devil appears as a panting fish, and I’ve made progress there too, so this has been a happy night’s Googling.