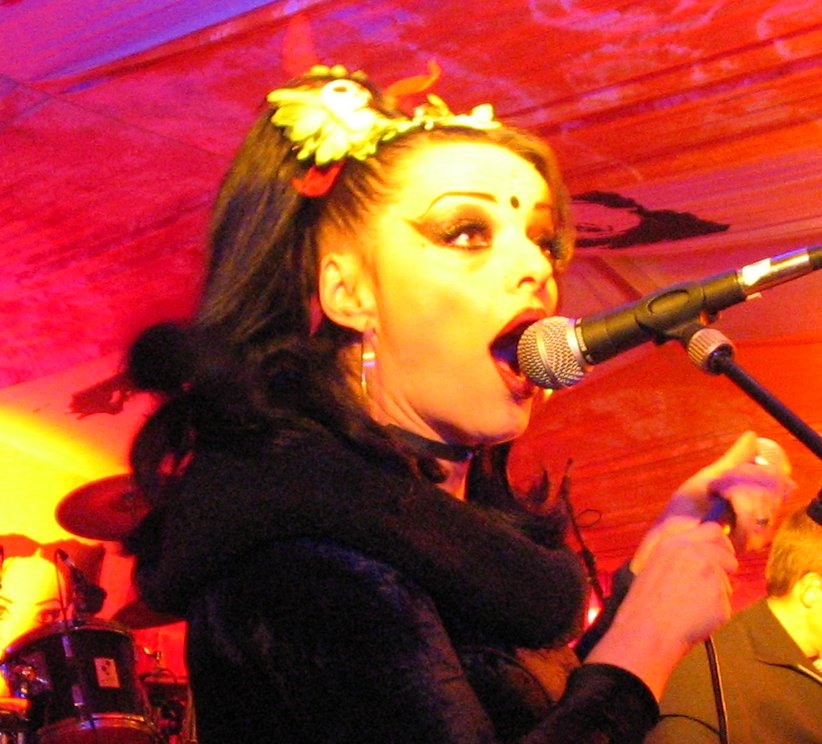 Someone now on another side used to put on a wobbly Zarah cassette when we did leather gigs over in the Federal Republic, and her sombre timbre recalls dark drunken nights on the way home, swerving back and forth over tree-lined moon-dappled country roads in the minibus to get rabbits for Sunday lunch:

She’s by far the most compelling singer in German from the second half of the 30s, partly no doubt because of Hitler’s curious decision to guarantee American domination of the entertainment industry by exiling half of Germany’s creative class in a westerly direction and murdering the rest to the east. But I’ve no doubt she’d have shone amidst better than the following appalling rubbish, posted by my good friend the ex-president:

I believe Nina Hagen figured she was what Zarah Leander could have been:

Even when she was on Planet P-Funk:

Let’s be honest: Madonna was so utterly, hopelessly inadequate:

In 1981, Hagen her daughter Cosma Shiva to the world. The father is the 1988 late Dutch guitarist Ferdinand Karmelk . in 1987 married Hagen in a “punk wedding” on Ibiza the then 17-year-old musician “Iroquois” from the London squat scene. After only one week separated the pair again. In 1989, she was romantically involved with the Frenchman Frank Chevalier, from this relationship comes a son. In May 1996, Hagen married the 15 years younger than David Lynn. The couple separated in 2000 In January 2004, Hagen married the 22 years younger Danish singer Lucas Alexander Breinholm. The separation took place in January 2005 From 2005 to 2010 Hagen was associated with a 28 years younger physiotherapists in Canada. Since 1982, Hagen is a vegetarian. She settled in August 2009 in Schüttorf of Pastor Karl-Wilhelm ter Horst reformed Protestant baptism. .

Post-war was pretty grim for reasons already outlined, but in the 60s came the spaghetti versions of the Wild West novels of Karl May (the German Zane Grey – he didn’t actually change his name to match, unlike Francisco González Ledesma aka Silver Kane, the late, Spanish equivalent). Older Dutchpersons tend to think of cowboys and Indians as German-speaking, because until quite late in the 20th century there was no daytime Dutch television, so they all watched the German channels:

And then, at long last, with Beethoven and Goethe getting restless in their graves, Zarah Leander’s old employers signed Siggi Götz, the Bavarian Benny Hill (does that make him the fastest milkman in the East?), to return German culture to pre-Hitlerian heights:

[
Fassbinder’s Lola, a distressingly brilliant swords-to-JCBs film, is also up there, again courtesy of Richard:

I sing Capri-Fischer, whose message from the Wirtschaftswunderbar is: why send troops to [Italy|whatever] when you can buy it:

Although I’m probably a bit more like a bovine Gracie Fields: