He also coined “flaxen Saxon.” With other absurdities. 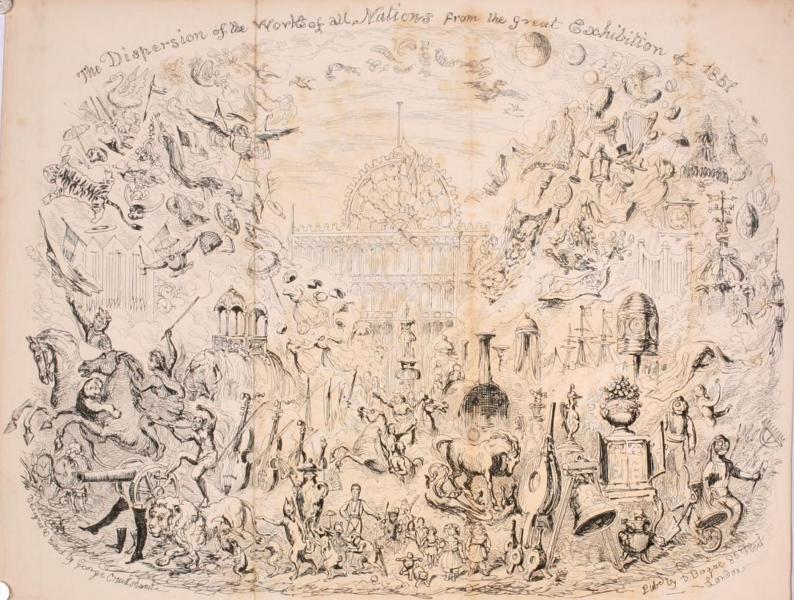 Cruikshank, "The dispersion of the works of all nations from the Great Exhibition of 1851", in Mayhew. Image: Archive.org.

. I’m still quite unsure what to believe, but doubts are stilled by the flow of gags and witticisms:

– Once as a girl on Battle Hill, she was fond of recounting, always in the same time-polished words, – once as a solitary child, I found myself, quite suddenly and with no sense of strangeness, in the middle of a war. Longbows, maces, pikes. The flaxen-Saxon boys, cut down in their sweet youth. Harold Arroweye and William with his mouth full of sand. Yes, always the gift, the phantom-sight. – The story of the day on which the child Rosa had seen a vision of the battle of Hastings had become, for the old woman, one of the defining landmarks of her being, though it had been told so often that nobody, not even the teller, could confidently swear that it was true. I long for them sometimes, ran Rosa’s practised thoughts. Les beaux jours: the dear, dead days. She closed, once more, her reminiscent eyes. When she opened them, she saw, down by the water’s edge, no denying it, something beginning to move.

What she said aloud in her excitement: ‘I don’t believe it!’ – ‘It isn’t true!’ – ‘He’s never here!’ – On unsteady feet, with bumping chest, Rosa went for her hat, cloak, stick. While, on the winter seashore, Gibreel Farishta awoke with a mouth full of, no, not sand.

But all the book’s bons mots can’t be the invention of one man, albehe in league with Him Downstairs! And thank goodness, and perhaps this is a token of the author’s affection for 18th and 19th century British fiction, the tradition of the flaxen Saxon may have been invented in 1851 by Henry Mayhew.

I know Mayhew for the same reason you do, but it turns out that London Labour and the London Poor was far from the be-all and end-all of his literary life. His novel, 1851, or, The adventures of Mr. and Mrs. Sandboys and family who came up to London to “enjoy themselves” and to see the Great Exhibition (1851), presents a pilgrimage more bizarre even than Ayesha’s drown-doomed exodus:

THE GREAT EXHIBITION was about to attract the sight-seers of all the world—the sight-seers, who make up nine-tenths of the human family. The African had mounted his ostrich. The Crisp of the Desert had announced an excursion caravan from Zoolu to Fez. The Yakutskian Shillibeer had already started the first reindeer omnibus to Novogorod. Penny cargoes were steaming down Old Nile, in Egyptian “Daylights;” and “Moonlights,” while floating from the Punjaub, and congregating down the Indus, Scindiau “bridesmaids” and “bachelors” came racing up the Red Sea, with Burmese “watermen, Nos. 9 and 12,” calling at the piers of Muscat and Aden, to pick up passengers for the Isthmus—at two-pence a-head.

But Mayhew takes the Dickensian and Rushdian view that there is nowt so strange as one’s compatriots, particularly in this case those from Cumberland:

Early the next morning, Mrs. Sandboys, with Jobby and Elcy, went down to the Fish Inn, to see the dozen carts and cars leave, with the united villagers of Buttermere, for the “Travellers’ Train” at Cockermouth. There was the stalwart Daniel Fleming, of the White Howe, mounted on his horse, with his wife, her baby in her arms, and the children, with the farm maid, in the cart,—his two men trudging by its side. There was John Clark, of Wilkinsyke, the farmer and statesman, with his black-haired sons, Isaac and Johnny, while Richard rode the piebald pony; and Joseph and his wife, with little Grace, and their rosy-cheeked maid, Susannah, from the Fish Inn, sat in the car, kept at other times for the accommodation of their visitors. After them came Isaac Cowman, of the Croft, the red-faced farmer-constable, with his fine tall, flaxen, Saxon family about him; and, following in his wake, his Roman-nosed nephew John, the host of “The Victoria,” with his brisk, bustling wife on his arm. Then came handsome old John Lancaster, seventy years of age, and as straight as the mountain larch, with his wife and his sons, Andrew and Robert, and their wives. And following these, John Branthwaite, of Bowtherbeck, the parish-clerk, with his wife and wife’s mother; and Edward Nelson, the sheep-breeder, of Gatesgarth, dressed in his well-known suit of grey, with his buxom gude-wife, and her three boys and her two girls by her side; while the fresh-coloured bonnie lassie, her maid, Betty Gatesgarth, of Gatesgarth, in her bright green dress and pink ribbons, strutted along in their wake. Then came the Riggs: James Rigg, the miner, of Scots Tuft, who had come over from his work at Cleator for the special holiday; and there were his wife and young boys, and Jane Rigg, the widow, and her daughter Mary Ann, the grey-eyed beauty of Buttermere, in her jaunty jacket-waisted dress; with her swarthy black-whiskered Celtic brother, and his pleasant-faced Saxon wife carrying their chubby-cheeked child; and behind them came Ann Rigg, the slater’s widow, from Craig House, with her boys and little girl; and, leaning on their shoulders, the eighty-years-old, white-haired, Braithwaite Rigg and his venerable dame; and close upon them was seen old Rowley Lightfoot, his wife, and son John. Squire Jobson’s man walked beside the car from the Fish Inn, talking to the tidy, clean old housekeeper of Woodhouse; while the Squire himself rode in the rear, proud and happy as he marshalled the merry little band along;—for, truth to say, it would have been difficult to find in any other part of England so much manliness and so much rustic beauty centred in so small a spot.

As they moved gently along the road, John Cowman, the host of the Victoria, struck up the following well-known song, which was welcomed with a shout from the whole “lating:”—

If you’ve read Mayhew’s interview in London Labour with the Italian organ-grinder (“When I am come in this country I had nine or ten year old, so I know the English language better than mine”), you’re probably the kind of person who’ll also want to ponder the mysterious mechanical instrument in Mayhew’s list of imagined musical entertainment at the Exhibition:

St. Paul’s and Westminster Abbey (“in consequence of the increased demand”) were about to double their prices of admission, when M. JULLIEN, “ever ready to deserve the patronage of a discerning public,” made the two great English cathedrals so tempting an offer that they “did not think themselves justified in refusing it.” And there, on alternate nights, were shortly to be exhibited, to admiring millions, the crystal curtain, the stained glass windows illuminated with gas, and the statues lighted up with rose-coloured lamps; the “Black Band of his Majesty of Tsjaddi, with a hundred additional bones;” the monster Jew’s harp; the Euhurdy-gurdychon; the Musicians of Tongoose; the Singers of the Maldives; the Glee Minstrels of Paraguay; the Troubadours of far Vancouver; the Snow Ball Family from the Gold Coast; the Canary of the Samoiedes; the Theban Brothers; and, “expressly engaged for the occasion,” the celebrated Band of Robbers from the Desert.

Double misfortune: Cruikshank doesn’t draw it (maybe pro-Brexit campaigners will have a go), and the Xenodokeion Pancosmopolitanicon in the next para is not an instrument but a package deal for the posh.

Other marvellous entertainment biz sideshows in SR’s, so far: tragic Osman, the ex-untouchable bullock-clown; the German-style Mughal ballad singers with illustrations held up on cloths; the horned beast on the snowy beach singing Jingle Bells; ditto entering an African evangelical service in London to the sounds of “Fix me, Jesus” (we’re still allowed to laugh at them); Mrs Torture (you may remember her); the Hal Valance, the grotesque TV marketeer who makes clavichords in his spare time…

Was the Saxon flaxen? Is white-van man a klaxon Saxon? So much to say, so little time: