These folks have been resting for a couple of years, but give them a stage and they’re away:

BELFAST (Reuters) – Twenty-five police officers were injured in clashes in a flashpoint district of Belfast when the biggest day in Northern Ireland’s summer marching season ended in violence, a police spokesman said on Tuesday.

[… Orangemen … 300 years ago … running battles … water cannon …]
“It was very clear this was an unprovoked attack, bottles stones and bricks flying over people’s heads into the crowd,” said Nigel Dodds, an Orangeman and member of parliament from the Democratic Unionist Party. “People could have been killed.”

“You can’t blame this crowd,” senior Sinn Fein member Gerry Kelly said. “This crowd was attacked by Loyalists, by whoever was on the other side of the barrier. “The whole machine was set up to force an anti-Catholic parade — and, frankly, drunken louts — through this area.”

There are a number of strange things about the ridiculous Parliament of the Religions associated with Barcelona’s failing and highly costly Forum event. One is that an ostensibly socialist administration should want to associate itself with a heterogenous bunch of nutters who think the world’s problems can be solved via a vaguely Ottoman inter-faith carve-up of power, with nary a mention of democracy and individual liberties.

Another is that said “parliament” and administration were prepared to do whatever it took to get a feudal thief like the Dalai Lama to turn up (he didn’t in the end) while ignoring transcendent religious figures who won and maintained a popular mandate over a long period of time in the context of a fairly democratic and free society. I am, of course, talking about the Reverend Ian Paisley, here seen demonstrating with a little help from his friends why for many of us there will only ever be one serious towelhead in the business: 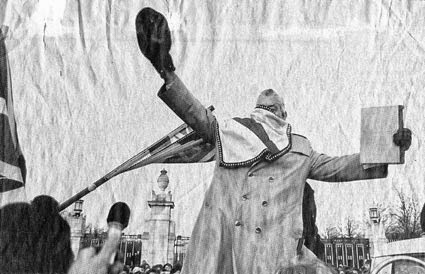 As a good European I have often wondered whether it might not be appropriate to combine the Glorious Twelth with bull running.