Tired of my never-ending get-poor-slow schemes, I went gold-panning in the national park today with Lluís, who is 74 but doesn’t look a day over 90. Scrupulously avoiding bars and the agents rurals in them on the way up (mining is illegal in national parks unless you build a really big one), we found a quiet part of the river and spent most of the day practising that holiest of Catalan arts, dry-sieving, which was banned by Franco (I know that’s true because I just made it up).

Dry-sieving is so called because Catalan rivers are always dry, except when they are not and you get swept twenty miles out to sea. It is quite like gold-panning in Ulster, except that it is mostly dry. Here are some reasons why you should not give up your job managing Boris Berezovsky’s assets in order to become a Catalan dry-siever:

However, don’t even think of going back to beachcombing, which in Barcelona will probably lead to you getting a discarded clinical hypodermic through your hand. The money–and you are only reading this because you think I may be able to help you in some fashion–is to be made on, or rather under, the boardwalk.

Many tourists think the man in the photo is a drugged, drunk crazy. They are right, but he has found a way to make money, using a condom and a twig to fish for coins dropped by fools like me: 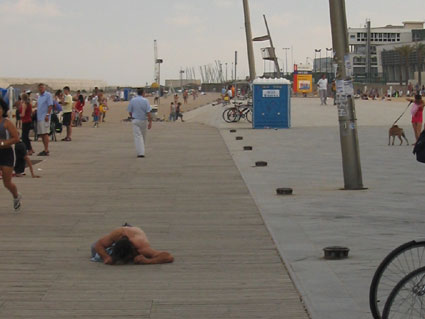