for surface running, Monturiol decided to save the muscles of his crew and install a six-horsepower steam engine. But you could not run a steam engine underwater: it would use up all the oxygen and turn the hull into an oven.

If you use a conventional coal- or wood-powered boiler the first objection makes sense, but I don’t see why regulating the temperature (or humidity) of the vessel should be a problem. Anyway, Hughes continues:

Monturiol had to find another way to raise heat, and thus steam. After prolonged experiment he came up with a form of chemical reaction between potassium chlorate, zinc and manganese dioxide. It produced more than enough heat to boil water and (as a bonus) oxygen as well, which was purified and piped back into the air in the hull. This chemical furnace could not raise enough power to drive the main engine, so Monturiol linked it to a smaller, two-horsepower steam motor for underwater running.

I’m intrigued to know what this reaction was. If you want oxygen, you heat potassium chlorate (2 KClO3 → 2 KCl + 3 O2), and mix manganese dioxide into the KClO3 to reduce the temperature at which reaction takes place. So was Monturiol handing over some of the oxygen to his fellow-socialists and burning off the rest with powdered zinc to power his auxiliary motor, was it all mixed up like a big (and for me confusing) firework, or was something else happening? And did the fact that he didn’t attract military support for his project have something to do with the fact that potassium chlorate is prone to explode?

I’ve heard that the replica in Barcelona harbour is strictly nonfunctional (rather like the clunky costume drama for which it was built, Francesc Bellmunt’s 1992 Monturiol, el senyor del mar) and I suspect that Matthew Stewart’s new book, Monturiol’s Dream, is non-technical, so I’m afraid that I will need to lay hands on a copy of Monturiol’s Ensayo sobre el arte de navegar por debajo del agua. Oh dear. 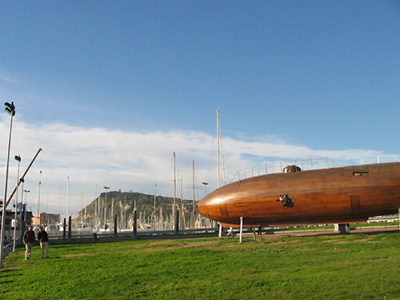 (Robert Hughes also speculates that the magnificent Monturiol may have provided Victor Hugo with inspiration for Captain Nemo and his Nautilus, but I wonder. One can brush over the differences between the surface-down philanthropy of Monturiol and the depths-up vengefulness of Nemo–a metaphorical son-of-Moby, pursuing a generalised Ahab–but the fact that Hugo mentions but doesn’t adopt anaerobism suggests to me that he had no serious knowledge of Monturiol. Otherwise Barcelona would surely have figured in the list of suppliers for the Nautilus:

Its keel was forged in Creusot, its propeller shaft at Pen & C°, of London, the hull plates at Leard, of Liverpool, its propeller at Scott, of Glasgow. Its tanks were manufactured by Cail & C°, of Paris, its engine by Krupp, in Prussia, its spur in the workshops of Motala, in Sweden, its precision instruments at Hart brothers, of New York, etc, and each one of these suppliers received my plans under different names.)