A mad, mad Japanese video, and a human ladder at the Muslim siege of Aleppo in 637. 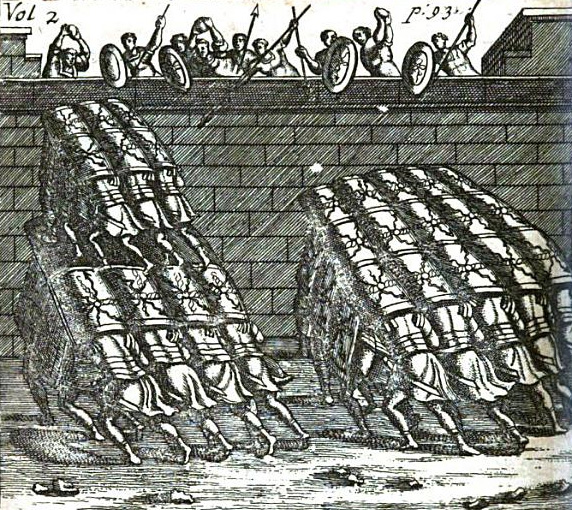 Roman double testudo, from Potter Archaeologia graeca. I'm told that the optimal shagging angle for turtles is 30º, so this counts as deviant.

This Japanese video (h/t Tom Woodworth) suggests their underlying idea may be to mimic non-animate castles, and so rather different from the western traditions of human castles, which sectarian ignoramuses continue to believe were invented in Valls around 1800, and which I believe were based on, or provided the inspiration for, siege engines:

My favourite of all these constructions is actually the human ladder allegedly devised by Dames, a Saracen slave, at the siege of Byzantine Aleppo in 637:

Among those fresh Supplies which Omar sent last to the Saracen Camp, there was a very remarkable Man, whose Name was Dames, of a gigantick Size, and an admirable Soldier. When he had been in the Camp fourty seven Days, and all the Force and Cunning of the Saracens could do nothing to the Castle, he desir’d Abu Obeidah to let him have the Command of thirty Men, and he would try his best. Caled had heard much of the Man, and told Abu Obeidah a long Story of a wonderful Performance of this Dames in Arabia; and that he was look’d upon as a very proper Person for such an undertaking. Abu Obeidah bad those who were to go with him not [to] despise their Commander, because of the meanness of his Condition, he being a Slave; and swore, that if the Care of the whole Army did not ly upon him, he would be the first Man that should go under him upon such an Enterprize. To which they answer’d with entire submission and profound Respect. Dames desir’d Abu Obeidah to raise the Siege, and remove about a Leagues Distance from the Castle. When Night came, Dames, who lay hid at no great Distance, went out several Times, and brought in with him five or six Greeks, but never a Man of ’em understood one Word of Arabic, which made him angry, and say, God curse these Dogs! What a strange barbarous Language they use.

At last he went out again, and there fell a Man down from the Wall; him he took, and by the help of a Christian Arab, which he took afterwards, examin’d him; who gave him an Account, that immediately upon the Departure of the Saracens, Youkínna began to abuse the townsmen that had agreed with the Arabs, and exact large Sums of Money of them; that he was one of them, and had endeavour’d to make his Escape from the Oppression and tyranny of Youkínna, by leaping down from the Wall. They let him go, as being under their Protection by virtue of the articles made between Abu Obeidah and the Aleppians, but beheaded all the Rest.

Dames then takes out of a Knapsack a Goats Skin; with this he covers his Back and Shoulders, and takes a dry Crust in his hand, creeping upon all four as near to the Castle as he could; and if he heard any Noise, or suspected any Person’s being near, to prevent being discover’d, he made such a Noise with his Crust, as a Dog makes that’s gnawing a Bone. The Rest of his Company came after, sometimes sculking and creeping along, at other times walking. He had sent two of his Men to Abu Obeidah, to send him some Horse about Sun-rise. When they came to the Castle, they found it in a Manner inaccessible. However Dames was resolv’d to leave nothing unattempted. Having found a Place where he thought it might be easiest getting up, he sits down upon the Ground, and orders another to sit upon his Shoulders; and so on till seven of ’em were gotten up, and sat one upon the others Shoulders, all of ’em leaning against the Wall with all their Strength. Then he that was uppermost of all stood upright upon the Shoulders of the second. The second arose next, and so on all in Order, till at last Dames himself stood up, who bore the Weight of all the Rest upon his Shoulders, unless they could relieve him by bearing any Part of their Weight against the Wall. By this time he that was uppermost could make a Shift to reach the Top of the Wall. They all said, O apostle of God, help us and deliver us! When he was got up, he found a Watchman drunk and asleep. He seiz’d him hand and foot, and threw him down among the Saracens, who immediately cut him to Pieces. Two other Watchmen, whom he found in the same Condition, he stabb’d with his Dagger, and threw down from the Wall. He then let down his Turbant, and drew up the second; they two the third, till at last they drew up Dames too, who enjoin’d them Silence, till he should bring them further Information. He went and peep’d in, where he found Youkínna, richly dress’d, sitting upon a tapestry of scarlet Silk flower’d with Gold, and a large Company with him, eating and drinking, and very merry. He came and told his Men, that he did not think it adviseable to fall upon ’em then, because of the great Inequality of their Numbers, but had rather take the Advantage of ’em about Break of Day; at which time there was no Fear but there would come some Help from the Army. In the mean time he went alone, and privately stabbing the Porters, and setting open the Gates, came back to his Men, and bad them hasten to take Possession of the Gates. This was not done so secretly, but they were at last taken Notice of, and the Castle alarm’d. There was no Hopes of escaping, but every one of ’em expected to perish. It was now towards Morning; Dames behav’d himself bravely, but overpower’d with Multitude, they were not able to hold up, when Caled came to their Relief. As soon as the besieg’d perceiv’d the Saracens rushing in upon ’em, they threw down their Arms, and cried Quarter! Abu Obeidah was not far behind with the Rest of the Army. Having taken the Castle, and proposed Mahometanism to the Christians, the first that embrac’d it was Youkínna, and some of the chief Men with him, who immediately had their Wives and Children, and all their Wealth restored to them. Abu Obeidah set the old and impotent People at Liberty, and having taken out a fifth Part of the Spoil of the Castle, (which was of great Value) divided the Rest among the Muslemans. Dames was talk’d of, and admir’d by all, and Abu Obeidah paid him the Respect of making the Army continue in that Place, till he and his Men were perfectly cured of their Wounds. (Simon Ockley, The conquest of Syria, Persia, and Ã†gypt, by the Saracens (1708))

The conventional history has Joachim surrendering because he was unable to break out, rather than because of break-ins, but for me the bit about spreading the load against the wall removes it from the merely mythical, whichever castle it was applied to and with whatever success.

I was reading Umberto Eco’s stupendous Baudolino last night, which gives inventive accounts and explanations of a lot of stuff I’ve puzzled about but hasn’t yet thrown any light on the human tortoise/castle business. I’ll be back.