From the rich mythology of KJB: Having left school at 14 in 1938 and wearied of life as a Liverpudlian brickie’s assistant, he went down to the Labour Exchange, announced that he was wages clerk, and, most of the young men being at war, immediately landed an office job. “Ah,” he said on his first day, “at my last place we used a different system; you’ll have to teach me this one.” His next major promotion, in 1949, is recounted on page 9.

The person whose great academic work I am charged with faking this month is not in the same ballpark (he can afford not to be), but anyone who thinks that a PhD still necessarily constitutes an original and significant contribution (a door-opener) hasn’t been near a university for a long time, and bureaucratic formalities (door-closers) shouldn’t be allowed to impede the ascent of the truly great.

Q: What’s the bigger story in the UK this morning, news that its young are thick as pigshit (OECD league table), or news that their parents are (NatWest/RBS are incompetent, citizens believe that consumption is all)?
A: From the world’s most popular news site: 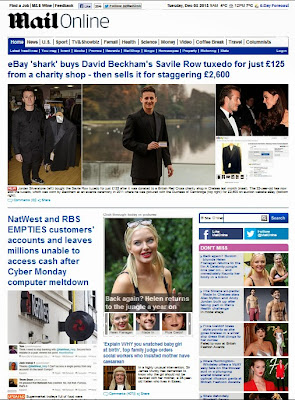