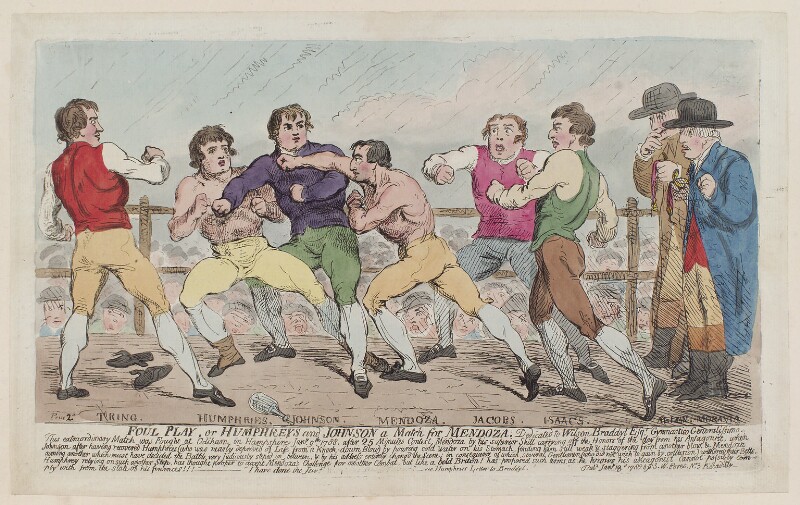 I had a drink last night in the Globe in Morning Lane, one of the best pubs in Hackney for a bit of banter. The landlord since 1988 has been Steve Powell of the London Ex-Boxers’ Association, which now has an excellent website with, among other stuff of interest, potted bios of a number of East End boxers. Everyone’s heard of Charlie Magri, and pioneer Jack Broughton and Terry Spinks are also quite well-known outside boxing circles, but I’d never heard of the following gentleman, a tribute to whom set me looking for more boxing verse and songs, listed here more or less chronologically.

Some excellent numbers have been omitted: for example, Prince Buster’s “Sting like a bee” and “Linger on”, both dedicated to Cassius Clay/Muhammad Ali, because they are instrumentals:

A third example, Paul Simon’s “The boxer”, which doesn’t do it for me, even in this cover by Alison Krauss, Jerry Douglas and Shawn Colvin:

Suggestions welcome. For example, I don’t think I know (of) boxing songs in other languages, except for Pindar’s ode to the champion Hagesidamus in 476 B. C., which I met today in Diane Arnson Svarlien’s English translation:

There is a time when men’s need for winds is the greatest, and a time for waters from the sky, the rainy offspring of clouds. But when anyone is victorious through his toil, then honey-voiced odes become the foundation for future fame, and a faithful pledge for great deeds of excellence. This praise is dedicated to Olympian victors, without stint. My tongue wants to foster such themes; but it is by the gift of a god that a man flourishes with a skillful mind, as with anything else. For the present rest assured, Hagesidamus son of Archestratus: for the sake of your boxing victory, I shall loudly sing a sweet song, an adornment for your garland of golden olive, while I honor the race of the Western Locrians. There, Muses, join in the victory-song; I shall pledge my word to you that we will find there a race that does not repel the stranger, or is inexperienced in fine deeds, but one that is wise and warlike too. For neither the fiery fox nor loud-roaring lions change their nature.