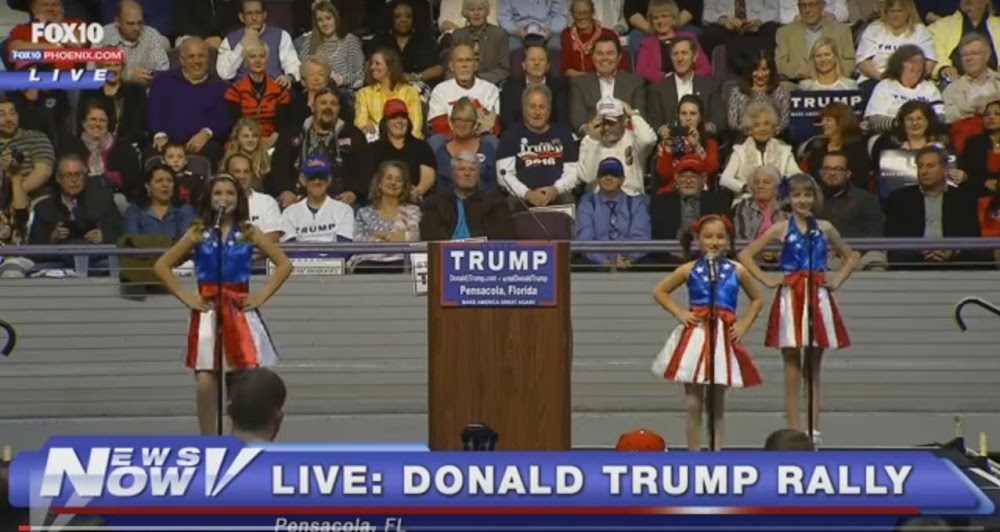 Back off, Don-iers, the Official Donald Trump Jam with the Freedom Girls is a mad masterpiece:

Is the faux naïf musical tone spoilt or enhanced by the moment of comparative harmonic complexity towards the end of each verse? Is the ditto non-native lexical stress (“enemies, of freedom“) the first step in reaching out to furriners after wrapping up the Republican nomination? Is the backing ©asio or a simplification of Blondie’s Heart of Glass riff aimed at Generation X:

? Is Pensacola, Fl., a wayward etymological child of Peniscola, Valencia? Why did international gaydom choose Sitges over Peniscola? Did the Nazis capture the Von Trapps? Would Barcelona’s nationalists already be shucking their oyster-world if their PR had been along these lines? Re my tenners at Ladbrokes: the GOP nomination is safe and Don-for-Pres is looking good, but will I lose my punt on Sadiq if Trump loses his way and comes roaring in in the London mayoral race as well? What is it with blond floppy hair? When, oh when, will this Friday end?