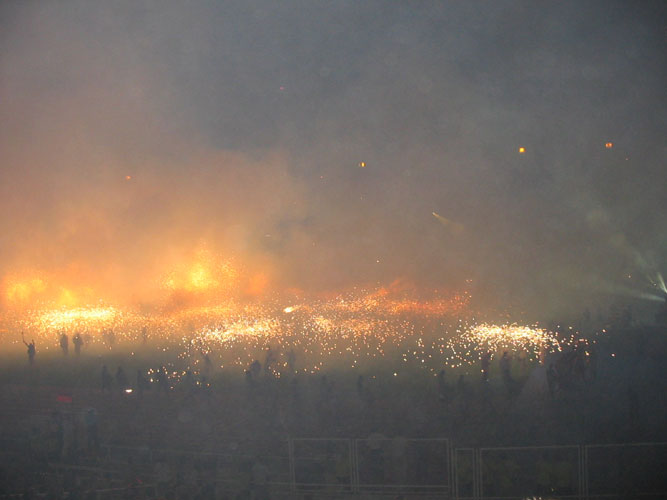 … said Sophie Adam last night at the opening of the Tenth World Police and Fire Games. I don’t know who she is, but she googles as a hard porn actress and she certainly didn’t get to partner Constantino “James Bond” Romero as presenter on the basis of her English language skills or her nous. Anaesthetist-turned-mayor Joan Clos is also linguistically challenged, and the programme was a mess. If Barcelona is serious about shaking off its provincial reputation, it needs to stop paying nephews and nieces to write its English copy and call a native speaker. My number is at the top of this page.

The rest of the ceremony was Barcelona all over:

In truth, the best reason to go to events like this is the Banda Municipal. Our town band was formed in 1886 and does the classics of the wind band repertoire well. Fortunately for them they weren’t on stage during the entry of the athletes, many of whom appeared to have come to participate in the eating competition: some other poor sods had to play Bella Terra for an hour and a half while the rest of us tried to figure out why Sophie Adam couldn’t tell the difference between the Poles and the Portuguese.