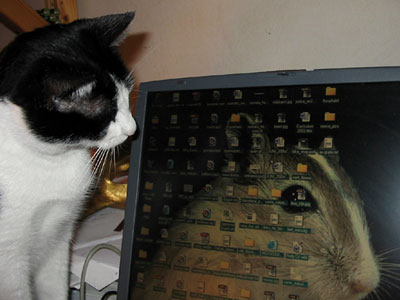 I’d like to thank all (OK, both) of you who clicked on the beer graphic and ended up donating last month. I spent many hours pondering how to spend your probably not particularly hard-earned dollars. Was it to be Paden’s Introduction to Old Occitan? Or should I indulge a life-long ambition and purchase a season ticket for Espanyol? In the end I had a couple of drinks and bought a cheap lamp for the cat to warm her bum. If someone donates something this month, I will consider plugging the lamp in and turning it on.

As will be clear from the accompanying photo, the purpose of this exercise is to transfer merciless mog’s sense of territory to a slightly less strategic bit of real estate. Apart from her trying to knock the cursor fly off my screen, she’s started defending herself vigorously against me when I come back from lunch and find her crouching on my keyboard, under my lamp, listening to Pastor Dick’s version of Doris Day’s version of Que Será, Será on my media player.