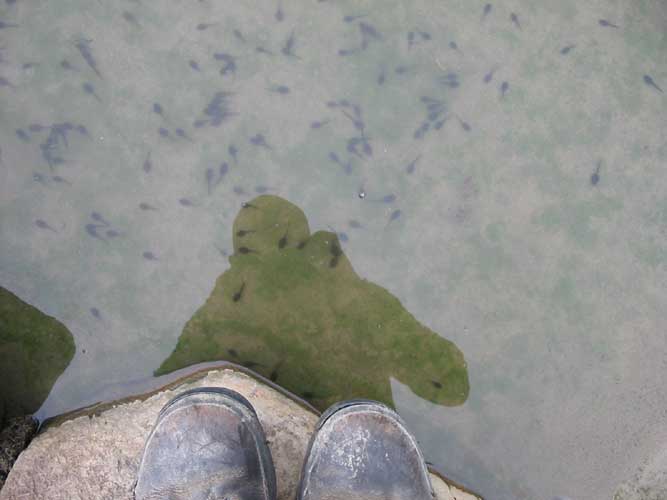 I went for an extra stroll this afternoon to have a look at a couple of ~2000m bulges in the foothills of the Pyrenees and got completely lost. This was despite having a very nice chat with someone from the local walking club before starting and having a very long chat with a couple of communist pensioners (Viva Stalin baseball cap, I kid you not) I met on the way. I usually manage reasonably well with the digitalised mediaeval manuscripts that pass for maps (Here Be Water. And Serpents. Maybe) in these parts, but a web of new tracks blasted and JCBed as part of the local pine harvest finished me off. And then there were the Ecuadorians.

Despite misleading government PR about the growth of a local tech sector, EU subsidies have not been used to liberalise and modernise the Catalan (or the Spanish) economy (see the free bit of the 2003 OECD country report) in the way the Czechs are about to do with theirs. Life here remains rooted to a large degree in what Anglos would regard as low-skilled, low-wage employment, but the exquisite sensibilities of many here mean that others are needed to do the dirty jobs. While in the 50s and 60s immigrants from Galicia and southern Spain filled the gap, rich Catalan daddies now source their cheap labour in Morocco, Central America and the Indian subcontinent in order that their children may wear the right clothes while demonstrating against globalisation. And, in order to keep wages down, much of the immigration is illegal. While Spain cheerfully signs up to all relevant European legislation, regulation of the grub-n-glug and the building trades and of agriculture is commonly acknowledged to be a contrived farce. It is in these last two sectors that a large proportion of the new immigrants, both legal and illegal, work, and they constitute a large proportion of the workforce.

Idescat, the regional government’s stats service, states that there are 676 Ecuadorians in Girona province. If the purpose of a service like this is to help government improve policy formulation and implementation, then there’s something badly wrong. I spend quite a lot of my time staggering around the countryside, and my experience – and the experience of people who accost me, allochthon and autochthon – is that their figures are complete nonsense because they make no attempt to include the illegals. There weren’t 676 Ecuadorians on Girona hillside this afternoon, but ï¿½10% of the official total population isn’t bad. So who were they and what was bothering them?

Although there’s not much of value in these hills, the outrageous gold-digger accoutre of the men who stopped me for a chat would fool your average matinée public. They were chainsawing trees and bringing them down the steep slopes to the lumber track on a bored-looking pony. They said that ponies back home were better climbers. Three of them said that they had been farmers but that Spanish trees paid better. The other said he had had a shop. And the burning issues on their mind were: