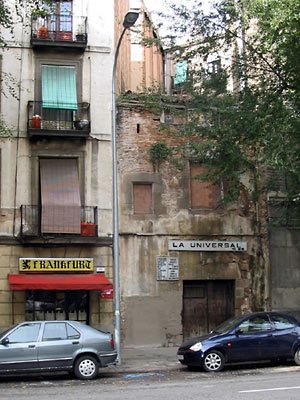 A new report from Baldie Research, Inc indicates that Spanish bus passengers eat significantly higher quantities of frankfurts and bratswursts than their car-bound compatriots because bars selling these downwardly mobile quasi-Teutonic delicacies are often situated next to bus stops. Frankfurt is at Comerç 12, convenient for both the Ciutadela park and the Picasso museum. Unfortunately for you it has also closed, as has La Universal, the bus company that used to trundle bipedal frankfurt receptacles from the big old door next to it to nearby working class towns.

La Universal’s destination board invites us to visit the following destinations, all of which have also ceased to exist, their names nowadays being written in Catalan:

There is no reason why that should interest you at all, but you might be able to tell me whether there’s a bar in Frankfurt called Barcelona.