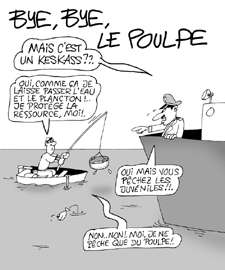 The elderly Galician in the seafood bar down the street is essentially a demand side economist. Octopus? No problem. Customers? Never been worse. Although he doesn’t know why, he’s basically right about the first bit. Here’s a snapshot of why that is:

I had to write something about Maghrebi agriculture last week and came across this stuff. While the Moroccan government continues to get mediaeval with political journalists, much of the Moroccan press has improved beyond recognition in the past decade. Sources used here: Le Matin, GlobeFish, La Vie Éco, L’Economiste, Assabah. Cartoon: the excellent L’œil de slim in La Vie Éco.