“The whole municipal district of Fuentes de Ebro found itself invaded by a terrible plague of locusts which covered all the irrigated and dry fields so that as far as the eye could see appeared to be dyed brown, since you couldn’t see the earth”

Neither lobster nor locust: Mariscal's prawn 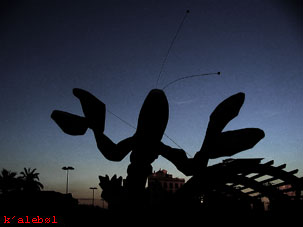 Neither lobster nor locust: Mariscal’s prawn

Langosta means both “locust” and “lobster” in Spanish. Telecinco last week got them confused and accompanied a story about a diminution of the locust plague affecting the Canaries with … well you look.

I noted the perceived similarity of locusts to dragons in this post, and there are numerous folktales here in which they display uncharacteristic behaviour. Here’s a (presumably) fifteenth century one:

From legend we are familiar with the exodus that the Mozarabs of Sarakusta [Zaragoza] were made to suffer at a certain point during the Moorish domination of the city, giving rise to the birth of El Burgo de Ebro. It is also known how the image of the Virgin for which they felt an especial predilection–whose chapel was next to the church of San Miguel–decided to leave after them, appearing to a shepherd. The better to shelter her, they built a chapel for her and she became known as Our Lady of Old Zaragoza.

Well now, once upon a time, around the year 1421, the whole municipal district of Fuentes de Ebro found itself invaded by a terrible plague of locusts which covered all the irrigated and dry fields so that as far as the eye could see appeared to be dyed brown, since you couldn’t see the earth.

Faced with the disaster–which would soon become famine–which the plague signified, and then being without human or material remedy with which to fight an invasion of such voracious insects, the inhabitants cried out to the sky, seeking the intercession of Our Lady of Old Zaragoza, which they carried from El Burgo de Ebro to Fuentes in solemn procession. With the image set up in the local church, the afflicted farmers celebrated large and beautiful religious ceremonies, even composing a novena; however, the plague persisted.

Finally the prayers ended without apparent result and, overcome by despair, they decided to return the image of the Virgin to its chapel in El Burgo, readying the horses and cart to carry it. But, hopelessly engaged in these tasks, they saw how suddenly the locusts, rising from the ground with a deafening noise, suddenly covered the sky until the sun was completely hidden, as if they were an enormous cloud. Shortly after they disappeared as if by magic. They had gone to drown themselves in the river Ebro, which flows nearby.

The return of the image of Our Lady of Old Zaragoza to its chapel in El Burgo de Ebro was triumphal. (Víctor Azagra Murillo, Cosas nuevas de la Zaragoza vieja)

Another story–same year, same region–has them dying spontaneously and en masse in the fields, which seems more feasible, or at least more so than a flying lobster.