“Little feet, arched and clad in new, elegant shoes, are one of the most attractive aspects of a woman...”

“En Santander. El pez y el reloj” in Los pueblos, ducking out of eternity and the meaning of life, Azorín is fetishising feet at the Cantabrian beach resort:

Little feet, arched and clad in elegant new shoes, are one of the most attractive features of a woman. I contemplate them all with the discretion with which a modest observer of life has to do these things. Maybe this splendid lady passing finds herself so close to me in order that I may realise an inspection; so–pay attention–I drop my little walking stick in her path and bend down, as is natural, to pick it up…

Then a fisherman catches a fish, Azorín’s watch falls in the water, and he wonders whether this magnificent swap

isn’t like when we invest our illusions in an ideal and then melancholy reality takes us on different paths.

So, no lectures on podiatrics for the poor: 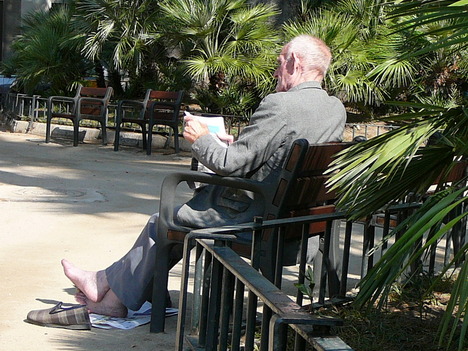