The gypsy beggars and backing-track musos who work the Barcelona local train service systematically and efficiently are an example to Spanish local authorities looking to improve their act: no grasping, arrogant, incompetent, Weberian civil service; a fine tradition of no-budget graphic design; and simple, effective copywriting in the language most likely to mean something, not to some hypothetical ancestral Volk, but to the punter. This however is remarkable: 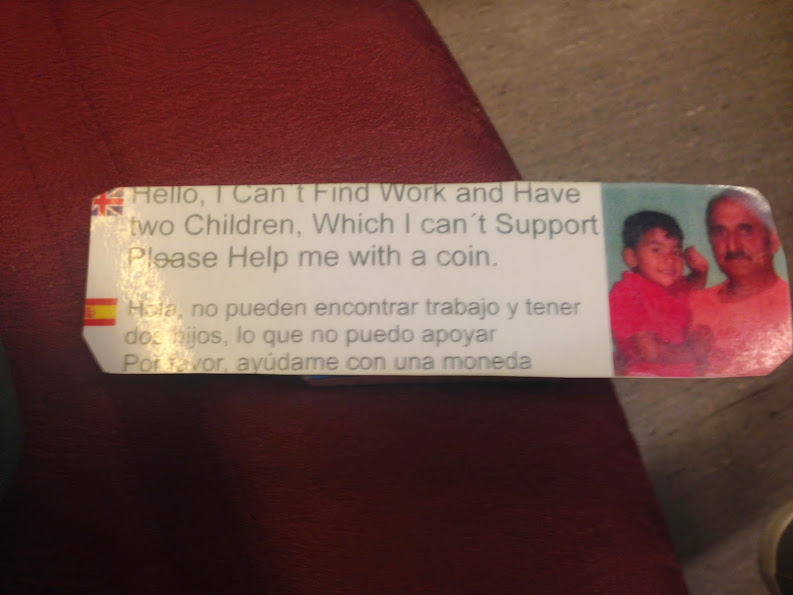 Recent Balkan gypsy incursions into Spain, both the one starting in the 1960s (which for instance led to the establishment of an impressive mafia clan in Barcelona’s Zona Franca) and then the one following the outbreak of the Balkan wars in the 1990s (which populated city centres with an invalid freak show), have tended to show the linguistic signs of passage through Italy: a Spanish vocabulary which is still heavily Italianate complements grammatical tendencies which don’t owe very much to any language I know; English is poor.

But here the Spanish is borderline gibberish, while the English is pretty good:

Hello, I Can’t Find Work and Have two Children, Which I can’t Support
Please Help me with a coin.

What’s going on? A one-off pater familias who learnt English from informal contacts with UN personnel in Kosovo, or something similar? A generational shift (dad may not have designed the flyer) towards informal, online language learning which favours English (schooling certainly can’t be blamed)?

But then I’d expect you to find more examples.

[
Pub Guardianistas regularly imply that I am the reïncarnation of Adolf Hitler because I say gypsy instead of the PC Roma. Not so, honest: I used to know the well-heeled interpreter (the state is important) for one of the settlements into which the Dutch gypsies were forced about 40 years ago as part of the denomadisation campaign, which has been running on and off for the last five centuries. He was very clear – an oriental potentate slumped on his Louis XIV couch, which he wanted to sell along with the house – that he was Sinti, not Roma scum. Romani also introduces more confusion than it dispels, and gypsy still seems to me a reasonable choice.
]

Update: Mr Commonsense suggests that the guy is a Romanian rather than a southern Slav gypsy, and that he learnt English begging in the UK, from which he was deported and to which he has decided not to return. Or that he has school-age and school-attending relatives in the UK, who have discovered Google Translate. Or something. So a victory for Theresa May!