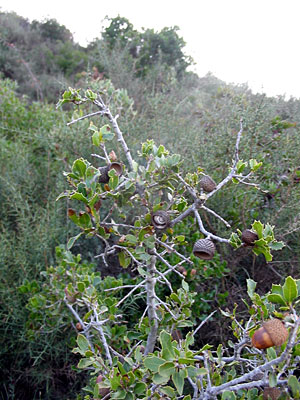 Most people think that the kermes oak, Quercus coccifera, is actually holly because it’s a prickly evergreen tree that round here doesn’t usually get much bigger than 2m. Cocciferous plants are so-called because they bear berries (coccus + fero), and people used to make cochineal out of what they thought were this plant’s berries. Then they found out that the berries were actually the females of a species of insect, so they called the unfortunate beast Coccus ilicis and – because chemical colorants were getting cheaper and better – were only slightly miffed when all the children in the world suddenly announced at breakfast one morning that they didn’t want beetles’ blood in their food any longer. Cochineal, however, has apparently nothing to do with coccus and instead refers to the Latin for scarlet, coccineus. (The word kermes seems to come from a similar-sounding Arab word that also refers to the beetle once squashed.)

This is all very confusing, but life gets a lot easier once you can tell the difference between a kermes oak and a holly bush. For, while most of the ten(?) other species of oak endemic to Catalunya seem to mix and hybridise like mad, the kermes oak keeps itself pretty much to itself in terms of looks as well as habitat. For example, it conspires with rosemary to fill up vast areas of countryside devastated by fire but looks much less happy when you find it in a forest. It doesn’t burn particularly easily, and even goats won’t touch it until they’ve eaten everything else, so if you meet one you like it will probably be there when you go back next week.

This particular kermes oak is on calcareous soil at about 250m on the coastal range just south of Barcelona. If you look carefully at the acorn shell in the middle, you will notice that a small snail has decided to live in it. At this point, you may need to explain to any small children in the vicinity that snails are different from beetles, that no one will ever buy their dehued cochineal however many snails they stamp on, and that if they leave the snails there they’ll probably turn into limestone in the end, which is much more interesting. Or you may have already stopped reading, in which case I’ll just toddle off to bed.

Just came across a very good botanical site at the University of the Balearics in Palma de Mallorca. Because their climate and terrain are much less varied than ours they’ve only got a subset of the stuff that you find here, but the photos are lovely. The Catalan version should be fine for most of you, but here’s the English hack anyway. It doesn’t work all the time because they’ve used images for titles, there are Balearisms in their Catalan, and all the other usual reasons.