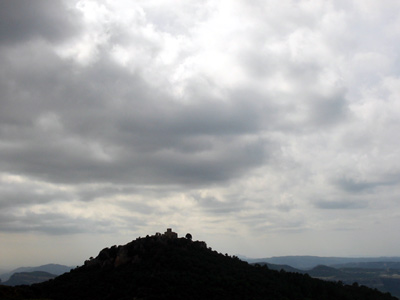 Berenguer of Santa Coloma had a daughter called Titborgs whose name is still with us because of a gift she made to the Templars way back in 1197. Now, I’ve got a fairly wide social acquaintance but I’ve never met anyone called Titborg(s), not even during a brief period of employment as a jungle musician in a sexclub. Which means, unfortunately, that I’m going to have to speculate irresponsibly, at some length, and without any discernible benefit to humankind as to what it means and how it got here.

Let’s start by noting that this is a northern European name that probably came to Catalonia via a Flemish/Friesian/Dutch (see the inset below) wife acquired during the crusades. Borg may refer to a mountain (berg/barg) or to a (secure) settlement (burg/burch/borough – Ein’ feste Burg ist unser Tit, as it were), the latter deriving ultimately from the former. If Mrs Berenguer came from a hill or a town called Titborg, then I assume either that Berenguer’s priest assumed that Titborg was an acceptable baptismal name where Mrs came from (rather like Brooklyn nowadays), or that Titborg in this context simply refers to some kind of title inherited by the girl from her mother.

The most likely explanation of tit is that it signifies tíd/tid/tiet/tied, time. There is a long tradition relating hills to the passage of time, ranging from the paasbergs (Easter mountains) scattered over the north German plain to Hans Castorp’s sojourn on Thomas Mann’s Magic Mountain, during which the death of an age is told. My case is helped by the (occasional) use of the Dutch word tijdberg to refer to the conic sandheap that accumulates in an upended hourglass.

Tit here might of course mean small – think titmice – but I suspect not. For a start, tit = small doesn’t seem to have been particularly widespread in the Middle Ages, and even when it does occur it is rarely as a prefix. Languages like Old English, on the other hand, contain numerous words that commence with the local word for time. I am particularly fond of tídfara.

That tit might actually mean tit is not the kind of possibility entertained in most dictionaries, but it seems at least as likely to me as the time hypothesis. (And the two hypotheses – fertility and the passing of time – aren’t necessarily incompatible: tiet/tied works as both tit and time in various Germanic dialects, giving rise to some dreadful puns.)

The American Heritage Dictionary of the English Language tells us that cyborg is “A human who has certain physiological processes aided or controlled by mechanical or electronic devices”. I can’t see Jordan suing us if we rescue titborg from the history books and reuse it in similar fashion.

There, wasn’t that useless?

… on a related theme, from someone who knows a lot more than I do and who I hope won’t mind being quoted:

Tidworth: early forms of the name – in a 14th century copy of a 10th century charter, in DB (Domesday Book) “tudanwyrthe” [th represents the letter ‘thorn’, like a ‘d’ with a cross stroke), “Tedorde”, “Tudewrth”, show that the “Tid” element comes from the personal name Tuda; in other instances it could be from the personal name ‘Tita’ (Richard Coates, 1989, The Place-Names of Hampshire, Batsford, London. The ‘worth’ element, means a curtilege – an enclosed piece of land attached to a dwelling). I am no authority on these matters but I do have 2 or 3 books to hand.

One principal is worth hanging on to, it is quite unsafe to assume the origin of an English place name without evidence of early forms. The present form may be the result of all kinds of distortion, including invention of history, as for example 2 Iron Age hill forts in Hampshire – Danebury and Norsebury. Nothing to do with Danes or Norse, Dane is from ‘dun’ = hill, ‘norse’ from ness/nose (of land).