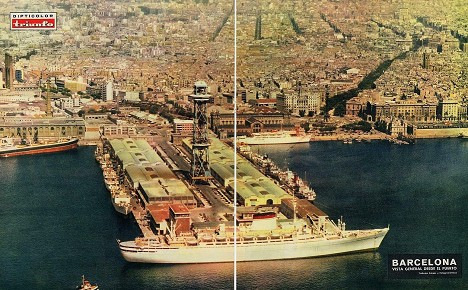 Another view of Barcelona, this time the centrefold from the magazine Triunfo in September 1962. Other photos on pp35-53, of which I enjoyed this one, a sanitised reminder that we are witnessing the final phase in Barcelona’s transition from a small town surrounded by villages and fields and, latterly, monstrous slums, to a great city; this one of the Monumental bullring; and this one of the Nou Camp. Triunfo is now being remarketed, as is so often the case, as anti-Franquista in some respect, when it is in fact no more (and no less) than a glossy symbol of a flourishing and complacent bourgeoisie, reborn in the 1960s with the help of some smart Opus Dei midwifery.