The Barcelona region contained a quite extraordinary wealth of weird medieval religious art until Napoleonic and Marxist visionaries decided to clear the decks to make way for their curious vision of earthly Paradise. One of my favourite survivors is the so-called Santa Majestad/Santa Majestat statue in the parish church of Santa María in Caldes de Montbui/Caldas de Monbuy, famous since Roman times for its 74ºC hot springs:

it rises much hotter than either the spring near Aix la Chapelle, or those of Bath or Bristol; it is boiling hot, and the people of the town come constantly there to boil their eggs, cabbage, and all sorts of vegetables, by simply suspending them under the spout of the fountain in a basket, and yet make use of no other water, when sufficiently cooled, for drinking either alone, mixed with wine, or cooled with snow [!!!] in orgeats, sherbets, &c. (William Gregory, British consul in Barcelona, in John Talbot Dillon, Travels through Spain (1781))

I say so-called, because, unusually, the image combines Christ in Majesty/Glory, the customary representation in Anglo-Cabronia and other less confusing lands, with his martyrdom. Only the head survived the Civil War, but here’s a stereoscopic image by Josep Salvany i Blanch of the original, and here’s a photo of the post-war reconstruction: 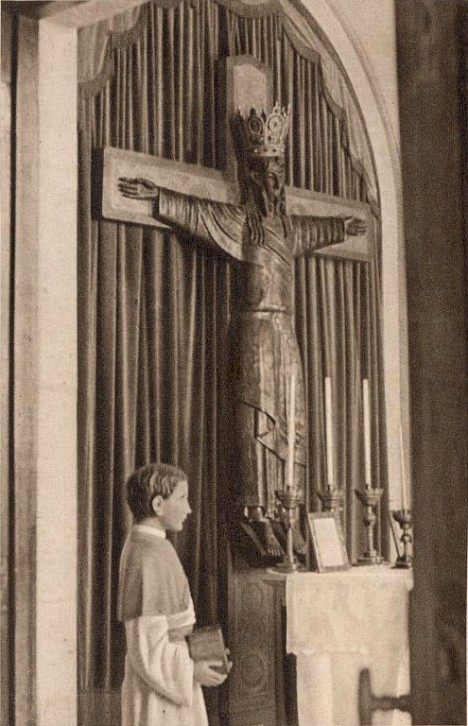 The Roman town was born around that liquid pyre, and its inhabitants, the Aquicaldenses, soon erected, between their dwellings and public swimming pools, beautiful temples dedicated to Apollo, to Minerva and to the Goddess of Health, whose votive stones are now embedded in the wall of the Catholic temple, where is venerated the Rex tremendous majestatis.

This Byzantine beautiful sculpture, eyes wide open, head raised, beard parted and with ringlets, inspires a certain terror. Its long tunic, strewn with colourful drawings, with hippogriffs, eagle-headed lions and other mythological animals, recalls the Majesties of Luca and Berilo Siriana [who?!], amidst mists of Indian deities. The imperial crown, with the breast band adorned with seven stars and the hanging waist belt gives to the Majesty of Caldas an sense of grandeur and severity…

The beautiful tradition that His Holy Majesty was carried to Caldas by a caravan of Bohemians and deposited in the church as proof of their Catholicism and as safe passage in their travels across Spain, has been replaced by the vulgar version that the beautiful image served the Bohemians as a bridge with which to ford rivers and streams.

Wikipedia says the image was brought by the gypsies in the mid-15th century (they entered Barcelona on June 11 1447, Enciclopèdia Catalana claims it’s early 13th century, while something calling itself Europa Románica believes it’s 11th century. If it was brought by the gypsies–I assume they constructed it shortly before–it would form part of a pattern of gypsies impersonating wandering Christians in order to justify campaigns of organised begging during their great migration west in the 15th century. Here’s an edited-down version of Stephanie Folse‘s best-guess summary of how and why gypsies ended up in Europe (much more detail at Rombase):

Three migrations from the mouth of the Indus, driven by barbarian invasions, gave rise to the Domari in Egypt and the Middle East, the Lomavren of Armenia and eastern Turkey, and the European Romany.

A 1068 Life of St. George tells of a recent plague of wild animals afflicting an imperial park in Constantinople. The Emperor called on “a Samaritan people, descendants of Simon the Magician, who were called Adsincani, and notorious for soothsaying and sorcery,” who killed the beasts with charmed pieces of meat. By the 1300s large numbers lived a shanty settlement known as Little Egypt outside the port of Modon/Methoni, halfway along the pilgrimage route between Venice and Jaffa.

Leonardo di Niccolo Frescobaldi thought they were repentant sinners, and during the 15th century, catching on to this need, they began to move purposefully through Western Europe, “claiming to be pilgrims and demanding subsidies and letters of dispensation.” They told the same tales and used similar supporting documentation (cf “Tengo 4 ijos”).

“The usual scam involved a group claiming to be from Egypt or Little Egypt … showing up in a city and informing city officials that they were Christians doomed to wander for a period of years to fulfill a penance imposed upon them for the sin of neglecting their religion. They would collect food, money and letters of protection from the city and then continue to the next town.

“By 1417, Gypsies were recorded in Germanic cities. In 1418, several thousand Gypsies under a leader called Count Michael showed up in Strassbourg. Gypsies were entering Brussels and Holland by 1420, Bologna in 1422, and showing up in Rome in July of that same year. They travelled into Spain by 1425 and Paris by 1427.

“By the middle of the century, rulers and town governments started banning Gypsies, usually citing theft, fortunetelling, begging and sometimes espionage as the reasons. Europeans also recognized as lies the Gypsies’ claims to be pilgrims in exile from Egypt, but there are a few instances of alms being given into the sixteenth century, apparently by slow learners.”

Anyone got more stories of gypsies bearing virgins or emperors, particularly to Montserrat?

Flotsam: this Provençal carol has gypsies from the east providing post-natal forecasting services at the birth of the Saviour, a smart and creative reinterpretation of the Magi myth; the brilliant Jesuit, Lorenzo Hervás, quite unfairly maligned by rival-cult member George Borrow, in his Catálogo de las lenguas de las naciones conocidas quotes descriptions from a variety of sources of the arrival of the gypsies in Europe, and their mixing with Moors and Hispanics in Spain; Barcelona is of course home to a sizeable community of Sindhi refugees from modern mayhem, but as far as is known they haven’t yet got together with Barcelona’s gypsies to talk about life on the Indus before Genghis and Tamerlane.