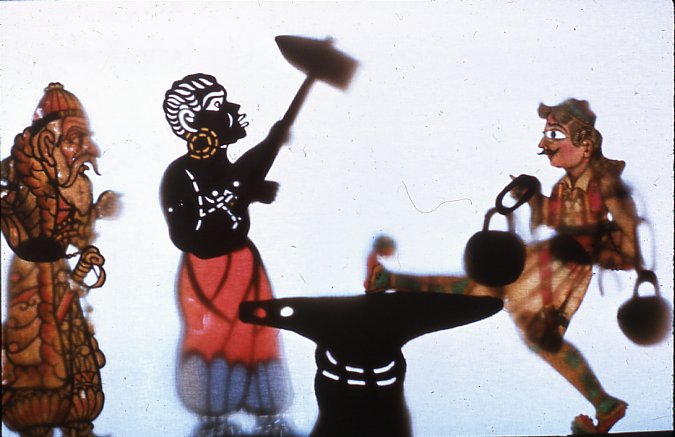 The Turks' gypsy hangman on the point of giving the Greek hero a new walking style in a scene from a Greek shadow puppet play (British Museum). An Ottoman custom? A Barcelona cop tells me that his Algerian colleagues stamp on the ankles of bagsnatchers, making them easier to identify and capture next time.

The other night we were watching Vicente Aranda‘s two El Lute films, which recreate the late 20th century tinker outlaw Eleuterio Sánchez‘s version of his exploits. In the second, Mañana seré libre, El Lute/Imanol Arias is cornered in a Málaga street, survives the best ever parody of exaggerated film firefights (I hope that’s what it is), and then runs away, says somone here, “like a gypsy”:

Long before we started assuming that reality came out of Mark Fowler’s toaster with pictures, George Borrow touched on this notion in The Zincali:

One of the most remarkable features in the history of Gypsies is the striking similarity of their pursuits in every region of the globe to which they have penetrated; they are not merely alike in limb and in feature, in the cast and expression of the eye, in the colour of the hair, in their walk and gait, but everywhere they seem to exhibit the same tendencies, and to hunt for their bread by the same means as if they were not of the human but rather of the animal species, and in lieu of reason were endowed with a kind of instinct which assists them to a very limited extent and no farther.

In no part of the world are they found engaged in the cultivation of the earth, or in the service of a regular master; but in all lands they are jockeys, or thieves, or cheats, and if ever they devote themselves to any toil or trade it is assuredly in every material point one and the same. We have found them above, in the heart of a wild mountain, hammering iron, and manufacturing from it instruments either for their own use or that of the neighbouring towns and villages. They may be seen employed in a similar manner in the plains of Russia, or in the bosom of its eternal forests; and whoever inspects the site where a horde of Gypsies has encamped, in the grassy lanes beneath the hazel bushes of merry England, is generally sure to find relics of tin and other metal, avouching that they have there been exercising the arts of the tinker or smith. Perhaps nothing speaks more forcibly for the antiquity of this sect or caste than the tenacity with which they have uniformly preserved their peculiar customs, since the period of their becoming generally known; for, unless their habits had become a part of their nature, which could only have been effected by a strict devotion to them through a long succession of generations, it is not to be supposed that after their arrival in civilized Europe they would have retained and cherished them, precisely in the same manner, in the various countries where they found an asylum.

Borrow has been slagged for stuff like this by American academics who, trumping Fowler, would have us believe that reality comes not out of toasters, but out of books. However, while Borrow’s work is rife with exaggeration and invention, the belief that it is possible to distinguish gypsies from payos by their biomechanics was and is widespread and respectable among educated, non-Nazi Europeans. A random example from Peter D Bell in Peasants in Socialist transition: life in a collectivized Hungarian village:

[A]s Csalog [Kilenc cigány] points out, even if their facial features are no different, many Gypsies even in the streets of Budapest can be identified by their gait, gestures, and general body movements.

And this shouldn’t surprise: walking style is a common and powerful non-genetic social and ethnic marker, as Joseph Anthony Amato notes at some length in On foot: a history of walking.

My commenter suggests that gypsies run differently because they are far less likely to attend school than the general population and thus don’t learn to run like PE teachers, but that wouldn’t explain pre-universal education sightings like Borrow.

More research is obviously required, but, while much of YouTube is devoted to home-made films of gypsy dancers, other forms of athletics are sadly lacking. I guess Michael Jackson’s version of Walk like an Egyptian doesn’t really count either.