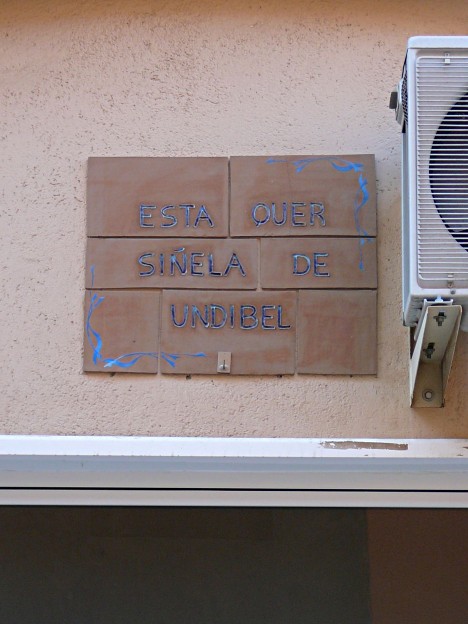 Similar phrases using the Caló vocabularly of Iberian Romani dialect are to be found on and in many other houses in the gypsy quarter of Gracia, Barcelona (on a variant of this walk).

The most common off- and online chat stopgap is Undibel siñela jucar, which George Borrow (The Zincali) would have interpreted (juncar = juncal) as “God is generous” (another unsourced glossary here, more modern articles on jergas), but for which the standard translation seems to be “May God bless you,” “Que dios os bendiga”, as in this personal playback moment dedicated to the emotional needs, as seen on telly, of Rocío Carrasco aka Rociíto, daughter of the recently deceased flamenco, copla and ballad singer Rocío Jurado and of the boxer Pedro Carrasco:

Here’s charismatic evangelical Brother Sisqueto at work in La Mina, Barcelona, where I sometimes take people, and where it is customary for the preacher to intersperse sermons with announcements for interesting real estate opportunities and the like–preachers often work as ambulant salesmen:

Here’s the first part of a new-/American-style faith penícula de gitanos, Por mi sangre, made by the excellent and prolific José Antonio from Benidorm:

Here’s the granddads’ choir of Talavera de la Reina, Toledo in their last church gig before retiring to play cards:

And here, to demonstrate that a sense of proportion is maintained, is an old religious joke:

In brief: Three mates walk into a pub and order some drinks. Wait, says one, isn’t that Jesus of Nazareth sitting in the corner. Nah, say the others, but it is, so the first one goes up Jesus and says, Lord, can you fix my bad back? OK, says Jesus, and fixes it. The first one returns to his seat and the second goes over to Jesus. Lord, my leg’s killing me. OK, says Jesus, and the leg is sorted, and number 2 goes back to his seat. Number 3 busies himself with his drink and appears completely uninterested in salvation, so Jesus strolls over to him, taps him on the shoulder, and overs his services. Get away from me, screams the man, I’m on sick leave!

Finally, and completely off topic, 7-year-old Piki from Alicante:

There’s huge quantities out there. I suppose we should at least thank the Lord for cheap, small, digital recording and editing technology. Or perhaps He should be thanking us.