I think that concrete bridges always look better when the water wearing away at them is vertically, as opposed to horizontally, incident. In the first photo, rain is falling on the bulldog’s bum at Glòries. Glòries is an intersection in at least two senses: it is the meeting point of Barcelona’s two great straight roads out of town, Diagonal and Meridiana; and it is also where fraudulent contractors pick up illegal labourers for a day out:

A good number of the latter are from Bangladesh (although both academic and punter here refer to all subcontinental Muslims as Pakistanis), and the second photo is of the 1989 Bangladesh-China Friendship Bridge near Dhaka. Taken by Mahmood Alam for the excellent Anglo Asian Tandoori Restaurant on Church Street in Stoke Newington, the bland skies of deltaland inexplicably changed during scanning to a wave of evil red Communist bacteria threatening the peaceful Islamic green of Asia’s take on mediaeval Holland: 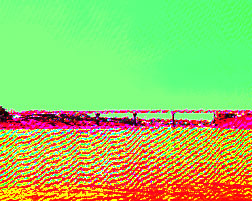 Inexplicably also – given the dreadful record of the power plants China built for Bangladesh in exchange for UN votes against Taiwan and India – it is still standing. Bridges like this tend not to get washed away during the calamitous floods that afflict Bangladesh periodically, but it’s still difficult to find Bengalis who will express an opinion on whether it is better for rain to fall on a bridge or flow underneath it.