A Barcelona news-stand operator talks about Catalan after being stickered by the language vigilantes. 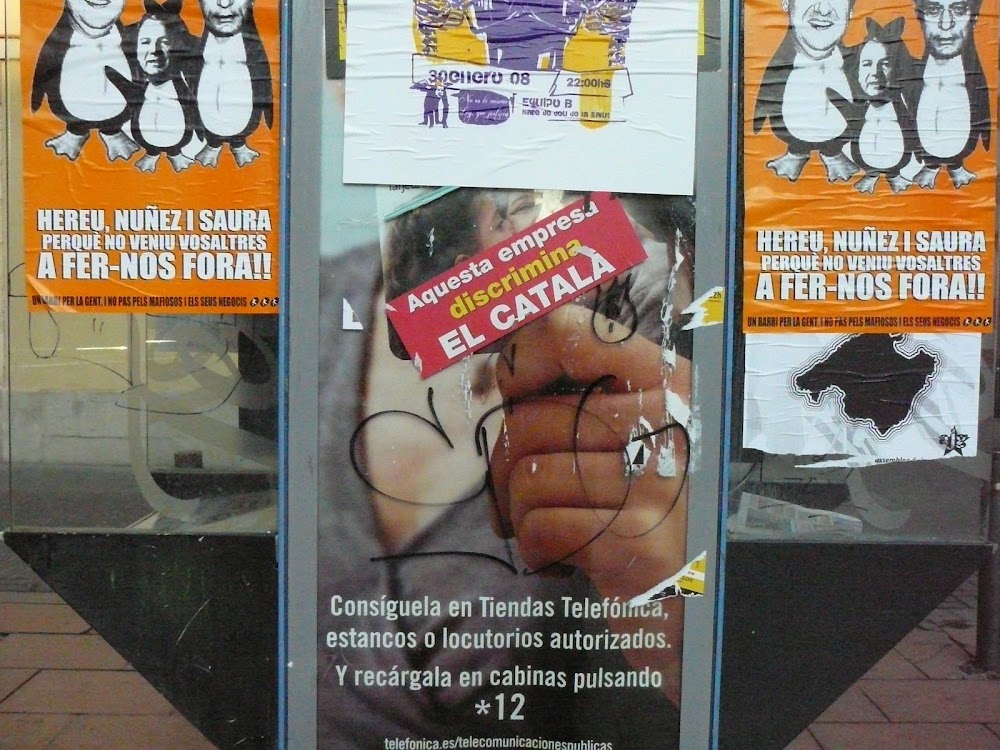 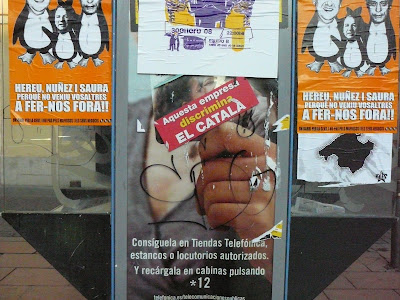 [El Quiosquero‘s pseudonym reflects his job running a Barcelona news-stand. His blog connects the personal and the political with a fluency achieved by few in the Spanish blogosphere.This is a translation with permission of a recent post. The plot turns on two confusion: Salva confuses red with green in Catalan, and Mrs Longcoat castellano with cristiano in Spanish. Castilian and Christian, language and faith, have become entwined in the mythology of the interminable wars against the Muslims in the south, and the mythology of Francoist crusade tells us that “¡Habla cristiano!” was “written on walls, telephone booths, billboards,” and possibly news-stands with coercive intent. I have never seen any evidence for this latter claim, and I wonder if the former hasn’t also been overstated by extremists of various plumage.]

I ended 2008 and started 2009 in the same way as last year–off work and attending a physiotherapy clinic. For obvious reasons I chose to a clinic near the stand so that when I finish my exercises I can drop by to see if anything’s happened or if Salva is pressed by some physiological necessity.

It was Monday and I was in the kiosk, to create the least possible disturbance, when a customer approached.
“Bon dia,” he greets me, in Catalan.
“Bon dia,” I reply.
“Buenos días,” rounds off Salva, in Spanish.
“Sorry… ,” says the customer, “buenos días.”
“Sorry, why?”
“Because you have displayed a poster stating that you discriminate Catalan.”
I don’t know what he’s talking about, but I go with the flow.
“Look, man, that’s just behind the counter; over the counter the customer is always right and we speak whichever language presents itself.”

No sooner does he go than I take a look round the side. Indeed there is a poster, a bit bigger than an A4, which in full colour announces:

THIS COMPANY DISCRIMINATES CATALAN. PLATFORM FOR THE LANGUAGE.

Since nowadays everything is seen as racism or discrimination, I step back inside the kiosk and go online.
[The Royal Spanish Academy]
discriminate
1. tr. Differentiate.
2. tr. Give inferior treatment to a person or collective on grounds of race, religion, politics, etc.
“I don’t know what discriminate means in Catalan, but in Spanish that’s poor sentence construction,” I say to Salva.

At that moment up pops Mr Lógic, who has overheard part of the conversation.
“Who’s being discriminated here?”
“We were discussing what discrimination means.”
“To separate … to separate with a little malice, I think.”
“Today I have ‘discriminated’ AVUI [a Catalan nationalist/separatist daily dependent on government handouts] because I have separated it from the other dailies and excluded it from the second row to make it easier to hand, so it takes you less effort to buy your copy.”
“I don’t think that’s the exact meaning either.”
“It’s a positive exaggeration.”
I tell him what’s happened. He agrees with me that the term discriminate as used here must refer to people.
“This company marginalises Catalan might be more correct,” he concludes.

I get home and sit down at the computer. My friend Google sets me down at the website of the Plataform per la Llengua. A superficial glance shows me an entrepreneurial team, concerned with the language’s defence and diffusion. I cannot imagine any of its members considering my kiosk a company, and much less them sticking a poster on it with coercive intent.

Behind me, in one of the modules that make up the library which takes up the entire wall, are lined up, amongst others, the Great Catalan Encyclopedia, the Pompeu Fabra dictionary, and the Institute of Catalan Studies’ Dictionary of the Catalan Language (first edition). I choose the latter as being the most up-to-date, and because in my IT days I wrote some computer programs for TERMCAT, their terminology centre.
discriminate
1 v. 1 tr. [LC] Make a distinction, differentiate.
1 v. 2 tr. [LC] Distinguish, discern.
2 tr. [LC] [OS] Treat (someone) in an inferior fashion.

Regarding the first and second senses, where would we be now we were unable to distinguish or differentiate! With respect to the third meaning, Donar un tracte d’inferioritat (a algú), there is no doubt that Catalan has a personality of its own, but we also understand that it cannot be discriminated against in the sense referred to in the poster, since, as the Diccionari indicates, you can only discriminate algú (someone) and not qualsevol cosa (something).

What happened is not that important and would be just one more kiosk anecdote were it not for what happened a few weeks later. In another of my visits to the kiosk I find Salva bowed, and it doesn’t take the almost three years we’ve been together now to realise right away that he has had an argument.
“Mr Quiosquero, Mrs Longcoat came and asked me for a scratchcard. I think she must have wanted the green ones, because she said vermel [vermell is actually red], but I didn’t understand her and asked her if she could please say it in Castilian and hey … she threw a fit. She said she would never come back and that I was eating the bread of the Catalans.”
“I’ll talk to her,” I try to reassure him.

Next Sunday the picture starts to become clear. Mrs Longcoat arrives while Mrs Quiosquero is on her own and they can talk.
“I asked your lad for a scratchcard and he told me to speak Christian! I’m not coming here any more unless one of you two is here.” (I don’t know if she was referring to Mrs Quiosquero and to myself or to Mrs Quiosquero and Dalr).
“It is strange that he said that to you because he’s pretty polite.”
“Yes. And when I told him I should learn Catalan because he is eating thanks to the Catalans, he told me that he wasn’t interested in Catalan.”

She takes the change given her by Mrs Quiosquero and turns to leave.
“I just can’t it into my head that Salva could have said that,” insists Mrs Quiosquero. “He didn’t say you should speak Castilian?”
Mrs Longcoat stops abruptly and changes colour.
“Ooh! Maybe he did … but even so, what he said wasn’t correct and discussing it with other neighbours they feel the same. So you may lose a lot of customers.”
“The trouble is finding a Catalan lad who will work the hours we work in the kiosk for the wages you earn in a kiosk,” concludes Mrs Quiosquero.

I talk to Salva again.
“No, Mr Quiosquero. She asked me for a green scratchcard … vermel, and since I didn’t know whether it was that one or not I said to her, sorry, but please talk to me in Castilian, and then she got cross and told me I had to learn Catalan because I was eating thanks to the Catalans and I was eating their bread. It’s true that I said to her that I’m not interested in Catalan at the moment, but when I see her I’ll apologise.”
“Look Salva, you’ve got to be a bit smarter. You could have given her any old scratchcard, and if it wasn’t that one you give her the other. We’ve got to try not to annoy people. If the lady comes, you should apologise but don’t go looking for her. And another thing: you eat because of your job even if it was given to you by a Catalan. And you should be grateful to me for giving you work just as I should be grateful to you for doing it well.

I’m entering onto a slippery slope knowing that I may be misinterpreted, but I believe in the freedom of expression and in my right to express an opinion.

I arrived in Barcelona in late September 1971 and started my classes at the university in early October. Not being a genius, I had to pay close attention to the material taught me in order to make sense of it, which is why I always tried to sit near the front. The day’s first class was Linear Geometry, which was given Professor Teixidó. I failed to pick up anything he said, not because I was unable to follow his arguments, but because my ear was not accustomed to his accent. I understand better the class of Infinitesimal Calculus given by Mr Bobillo but, apart from the accent, the students asked questions indiscriminately in both Catalan and Spanish, and both teachers responded in the relevant language. In the days that followed I realised that this was the norm at the University of Barcelona and learning Catalan would be very handy if only to understand what they said.

It was in early 1972 when, in the kiosk on the ground floor of the building where my girlfriend lived, I saw a little poster announcing Catalan classes subsidised by Barcelona Council, then I think chaired by Viola Sauret. You got two classes a week for 100 pesetas a term.

I admit I didn’t learn very much. The classes focused on grammar and spelling for people who already spoke Catalan, and for me time passed very slowly. I learned that you say bustia instead of busó, sinqué instead of quintu, vestidor instead of vestuari, or that it is incorrect to say mostruari because the real word is actually mostrari. Little else. The rest of what I know (which is not much) I have learned in family conversations, watching TV, or reading the newspaper, because in all the companies where I have worked Spanish dominated. But now, at home, in meetings with friends, our gatherings are formed of some people who always speak Spanish, others Catalan, and others who use either language depending on who they’re talking to. And we all understand each other.

What I want to say is that those with most interest in learning Catalan are those of us who come from elsewhere, if only in order not to feel different and “discriminated”. I want to say that I think it laudable that associations, platforms and governments exist which are concerned with promoting their language. And I want to say that I reject and will always fight anything imposed on me, whether by law or not. That is my understanding of freedom and democracy. Salva and I will learn Catalan from conviction, from an understanding that we need it to live in Catalonia and because it is something we owe to the Catalans who welcomed us. But not whether we like it or not.

If the Platform per la Llengua provides us with someone who sells the newspapers and does not steal, Salva will attend Catalan classes every day until he knows it satisfactorily. That is what Mayor Viola wanted to achieve with 1972’s Barcelonans, who spoke a Catalan they had learned on the streets. A Catalan of which they had been robbed in the colleges and schools. And the Plataforma per la Llengua is attempting something similar now: rob me of customers by discriminating for linguistic reasons, discriminar per motius lingüístics (Great Catalan Encyclopedia) against Quiosquero and Salva.

And a word of warning. The world of the news-stand being as it is, and with the predictions for the immediate future, it is more than likely that we will come to miss (in Barcelona) assistants of Ibero-American origin, because the profession of newspaperman is on course to become a marginal job which will be taken up only by Moors, Romanians, Chinese, Pakistanis … and, thanks be to God, some immigrant who understands us even by speaking Spanish.

By the way: the above poster no longer occupies the side of the kiosk. The Contra must have torn it off.