The programme for the August 2009 fair and feasts of St Bartholomew in Casasimarro (pop 3,400, PSOE mayor), Cuenca province opens with some progressive-atavist best wishes from the President of the Government:

Strangely, the programme for the feria and fiestas of St Julian, held more or less simultaneously in the provincial capital (pop 54,600, PP mayor) contains no such message. Is this because Zapatero only regards himself as leader of the Spanish who vote for his tribe, or because Cuenca felt that he was unlikely to add to whatever San Julián provides, and chose not to solicit his assistance? Or is it perhaps because the bishop of Cuenca hasn’t yet found the time or perhaps the courage to take down the memorial to local MP and victim of Republican justice, José Antonio Primo de Rivera?

Re which: it does not fail to amuse that historical warfare hobbyists in Cuenca devote so much time and energy (they do) to a pale incompetent like José Antonio, when just around the corner there is a memorial to a genuinely evil man of the right, and one of far greater influence on the outcome of the war and the longevity of the dictatorship: Juan March, Franco’s banker, whose foundation runs the Museo de Arte Abstracto Español based in Cuenca’s inexplicably renowned Casas Colgadas. 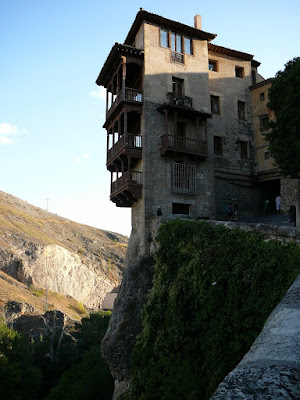 The Casas Colgadas have got to count as one of Spain’s major tourism cons. The plural is difficult to justify, and timber-framed overhangs (using modern wood) are not exactly rare in this country or others. However, this particular marketing fraud doesn’t appear to have been originated by Mr March, who had bigger fish to fry. Instead it seems to have emerged in the national tourism boom of the mid-20s, prior to which Cuenca was visited primarily for its Moorish aspect, its cathedral, and its scenery; for the bridge over the Huécar; and in jingoistic recollection of Peterborough‘s capture of it during the War of the Spanish Succession. If you want to see the Casas Colgadas in their full glory, don’t go to Cuenca but instead visit the stand of the Amigos de Cuenca at the marvellous Feria de Albacete in September, where the maquette is considerably more extensive and impressive than the original.

If you nevertheless visit Cuenca, but on a limited time-budget, you might want to give March & Memory a miss and head up instead to the Fundación Antonio Pérez, one of the most enjoyable collections of 20th century art and ephemera I’ve seen anywhere (there aren’t many). Unlike the Last Pirate of the Mediterranean’s dreary ego-monument, it also happens to be free.