Get this round your head. 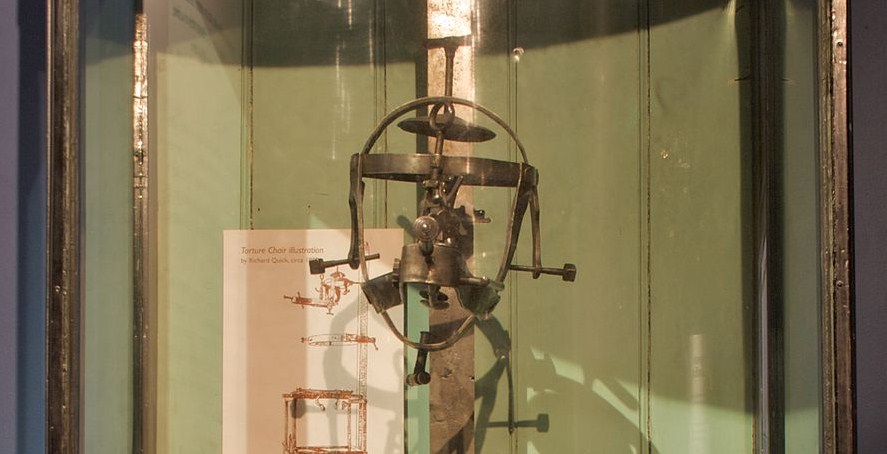 The 19th century retro torture chair is the Hornidude’s star attraction, and its position to the right of the star chamber door is surely designed to distract attention from an amusing communication high on the wall to the left, whose paradox I paraphrase from memory (au revoir, subtlety!) as follows:

When the great man’s Wunderkammer passed into the hands of the City of London, it was reorganised on behalf of the London County Council by Alfred Cort Haddon to reflect contemporary belief that human societies evolve unilinearly through various stages of development, with Dullwich at the pinnacle. We have now evolved to a higher stage, and no longer hold that shameful belief.

I imagined the comfort that may bring to bashful of Bethnal Green as he lies in his cave, pondering thoughtlessness, and then, before the nurse could reach me, I hyperconnected to la caverna.

This is the spelaeological Platonism, many times removed, which is used by the various nationalist/socialist/fascist (see e.g. Ricardo León, Cristo en los infiernos (1941)) Spanish tribes descended from Marx & Co. to refer to the obfuscation of public understanding of reality by media controlled by a mafia. Though they are too polite to subscribe explicitly to old-fashioned social evolutionism, the tribes of progress believe this must and will be superseded by a far superior system: media controlled by a government controlled by a mafia, at which point we might all trip happily out of la caverna.

La caverna is a favourite in the Catalan oligarchy‘s press, and buttresses the notion that the rest of Spain is populated by greedy grasping cavemen. Apart from being dreadfully unfashionable since around 1945, this is a monstrous missed opportunity: for oh! if only! if only we could all accept that we all live in the Hornigod cave, then how happy we all would be! Here’s R, the ex-African poet in Yevgeny Zamyatin’s mindblowing totalitarian romp, We (1921-ish):

Those two in Paradise, they were offered a choice: happiness without freedom, or freedom without happiness, nothing else. Those idiots chose freedom. And then what? Then for centuries they were homesick for the chains. That’s why the world was so miserable, see? They missed the chains. For ages! And we were the first to hit on the way to get back to happiness. No, wait … listen to me. The ancient God and us, side by side, at the same table. Yes! We helped God finally overcome the Devil—because that’s who it was that pushed people to break the commandment and taste freedom and be ruined. It was him, the wily serpent. But we gave him a boot to the head! Crack! And it was all over: Paradise was back. And we’re simple and innocent again, like Adam and Eve. None of those complications about good and evil: Everything is very simple, childishly simple —Paradise! The Benefactor, the Machine, the Cube, the Gas Bell, the Guardians: All those things represent good, all that is sublime, splendid, noble, elevated, crystal pure. Because that is what protects our nonfreedom, which is to say, our happiness. Here’s where the ancients would stand around discussing things, weighing this and that, racking their brains: Is it ethical, unethical? … Well, you get the point. What I’m saying is, there’s this great poem of Paradise, right? Extremely serious in tone, of course … You understand, don’t you?

Of course, we’d still have to put up with the Turks nudging one other and saying, “And there’s no cave like the Cappadocia Flintstones Holiday Cave Hotel, eh?”, but look at the progress made in South Africa:

A bus pulls up to a mixed crowd, and the Xhosas and the Zulus and the Indians and the Whites engage in furious battle to get on first. The driver locks the door, winds down the window, and says, “Look people, apartheid is over. As far as I’m concerned you’re not black or brown or white – in fact you might as well all be blue! So shut the fuck up, and let’s have the blues first.”

While I’m all in favour of bubble cars and kipper mousse, I do totally wish the Horniman could curate the clock back to before the arrival of Science, take down the silly notice, and enclose in the cool embrace of the torture chair the mermaid, a viola, or children selected at random from the queue for the ice cream kiosk. Let’s collaborate to make this a reality.