Once upon a time Pere Quart (Joan Oliver to his friends) composed some often wickedly funny verses that were published with drawings by Xavier Nogués under the title Bestiari in Barcelona in 1937. His treatise on the camel and the dromedary is reminiscent of one by Ogden Nash that I blogged into melodious Catalan a couple of months back and I prefer his zebra: 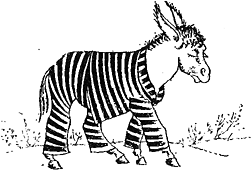 Strolling the sandorama:
A donkey trapped in its pyjama.