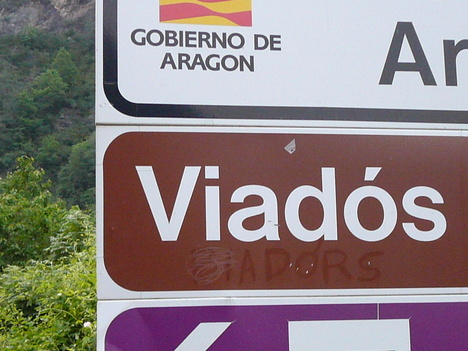 In the spelling carnival that is the only creative feature of Iberian nationalisms, the proponents of the creation of yet more language madhhab generally favour the etymological principle over the phonemic heresy, but those of the former faith are often bitterly divided over its application.

For instance, it is crystal clear to all but Adolf Schicklgruber, Francisco Franco Bahamonde, and Trevor the Baldie that Viadós (sp) should in justice be spelt Biadórs and/or Biadós (the scratched-out “B” is mere infantile vandalism).

But is the Way referred to in this photo that of the Bear (d’ours)? Or does this path twixt mountains recall the pointy peaks of that Saxon fertility deity Diana Dors? “Heidi, Heidi, deine Berge sind meine Welt,” sang Normaal, but there’s no point in looking for trouble.

Probably the most intelligent solution to the current peninsular spelling crisis would be that apparently adopted for the first Spanish performance of Brecht’s Spanish Civil War play, Die Gewehre der Frau Carrar.

To avoid problems with the authorities, the translator relocated the action, the characters and their names from the Malaga village foreseen by the author to the Italian coast.

Italian as Spain’s new lingua franca would be more practical than Latin, being merely decadent as opposed to dead, and international languages have always been a bad thing anyway.

(
The Catalan regional library used to publish some information in patriotically bad English and Spanish, but the villagers believed this caused giddiness and fits in humans and abortions in donkeys, so the director’s niece has been reassigned to folk dancing.

The BNC’s Madrilenian counterpart has never entertained any such pomps and prides, although it does at least serve its citizens in the language most spoken.

The Spanish national library believes with respect to foreignese that, as with raw goat brains and Barcelona cocktail bars, any delight must be sought in the delay.
)

J has kindly passed me a collection of columns by Cela published in 1994 as A bote pronto in which he says that Brecht used Italian names in the original and lectures Brecht and others of similar persuasion on the long-term futility of “playing billiards with a fallacy”. I don’t know the play.