Following the post on evidence in Barcelona of the relationship between Saddam and Alkiedoodah, I have had several interesting conversations with The Right Reverend Dom Gelul. His work (and I paraphrase the jacket of a book by Kamal Salibi):

reveals startling linguistic evidence which controversially suggests that Judaism originated not in Palestine but in Catalonia.
While looking at a gazeteer of Catalan place names, he noticed a remarkable concentration of Biblical place names in an area 6km long by 2km wide – Barcelona. Ancient Catalan, like Arabic, was written without voles. Dom Gelul believes that scholars might have added the voles wrongly when standardizing texts, and so he went back to the original unvoled Old Testament in a way that will satisfy the Indymuddled crowd.
The geography of Palestine has never corresponded in any way to the apparently specific stories in the Bible. Dom Gelul’s research authenticates the events as history for the first time – but within a Catalan setting.
‘Dom Gelul presents his theory both confidently and with becoming modesty’ Country Life

Here follows a list of equivalents. I’ve left Jerusalem as a challenge for you; the first correct answer with name and address provided will receive a handpainted representation of a vole:

Ah, you will say, showing that the Old Testament took place in Barcelona isn’t enough. What about all those stories?

Well, I’ve got good news for you: Exodus is nothing more than a ridiculously exaggerated account of the ten plagues of the Baix Llobregat and the subsequent flight of Catalan nation from El Prat de Llobregat to Barcelona. The Catalans probably used sections of the coastal motorway finished by the previous administration and were fortunate enough to approach the Red River (of which more below) just as the first, doomed bridge was swung into place. Here’s a map of this holiest of treks: 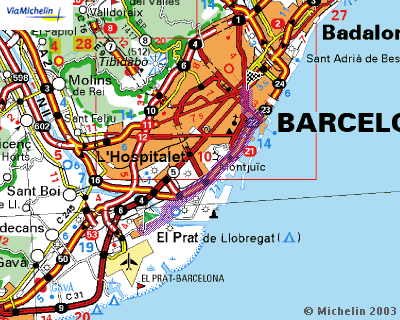