Unfortunately the Catalan source for this translation gives us no context for Enric; we don’t even know if the photo is of him (it’s included without attribution on another page, so I’m assuming it’s not). Anyhow, here he describes his involvement in some of the bloodiest battles of the Civil War:

At the beginning of the war, I was living in Anglès [Selva, Catalonia]. I was for the Republic. I volunteered for the front.

In Sarsuela de la Sierra (Cuenca), when we were doing our training and were still conscripts, we couldn’t eat until the captain gave permission. One time, we went into to the canteen and the captain wasn’t there. We came and went three times. The third time the captain appeared. Then they distributed the food and a soldier, tired of waiting, threw himself down on the grond. The captain made him get up off the ground and told him to eat. The soldier answered that he didn’t want to eat. The captain told him twice more and the third time drew his pistol and killed him.

[A l’esglèsia del meu poble i van anar refugiats a viure-hi. I think there’s something missing. Educated guess:] They took over the church of my town and refugees went to live in it. They knocked down the bell tower and burned the saints.

At the front, there were days when we had nothing to eat, and if we ate then there wasn’t very much. Four biscuits, a bit of jam and not much else.

We had to travel everywhere by foot. I was injured in the fighting and lay there all day. At night they picked me up with a stretcher and in a boat we crossed the Ebre [Ebro] to Flix, where I was taken by ambulance to Tarragona: there they gave me first aid and finally I was taken by train (on a stretcher that shifted from side to side) to Manresa, where they operated on me.

I remember a lot of bombardments. On the Ebre, at Belxite, the town was flattened. I’ll tell you about one: all of us soldiers were in a trench and an aeroplane began to shoot at one end and kept going without stopping. We were at the end and when the aeroplane was shooting a few metres from us, it ran out of bombs [sic] and had to leave. Our hiding places were the trenches, but when the planes came and there weren’t any, you escaped as best you could. Some times we made a pile of rocks behind an olive tree and lay down behind it. I remember some amusing moments at the front: we crossed the Segre and we bumped into some Franquista soldiers, we said: Don’t shoot! And we exchanged tobacco for cigarette papers. They had tobacco and we had cigarette papers. 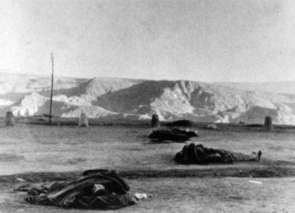 It was very, very cold in Terol [Teruel], our fingers froze, lots of my comrades died of cold. Later I was injured and I went home. I made friends with soldiers from my company, but they’re all dead now. I was on the front for a couple of years. When the war finished I did military service. I was on the front on the Ebre, at Terol and Belxite and on the Segre. In general, all the war was very tragic but most of all on the Ebro because when we were shooting with the machine gun they mortared us and we were all wounded. You were only on the Ebro a few days, and when you left you were either wounded or dead. Lots of days the same thing happened: the daytime belonged to the nacionals and at night we attacked. The next day around 11 in the morning, with planes and the Moors [so-called because Franco’s revolt started in Spanish Morocco and many of his troops were from there] following behind, already belonged to the nacionals again. I remember that the fighting was very fierce in the Sierra de Cavalls and the Sierra de Pàndols.

I didn’t have too much contact with my home because many of the letters I wrote were lost. The letters that arrived took four or five days if everything went well.

Even now I still have war wounds. I’ve got mortar shrapnel in my foot, thigh and the fingers of my right hand.

[
The first photo has no attribution and is from the site of a school in Anglès. The second, a Capa, was taken near a freezing Teruel just before Christmas 1936 and is from guerracivil.info.
]